MIDDLEWICH BY NIGHT: THE ALHAMBRA 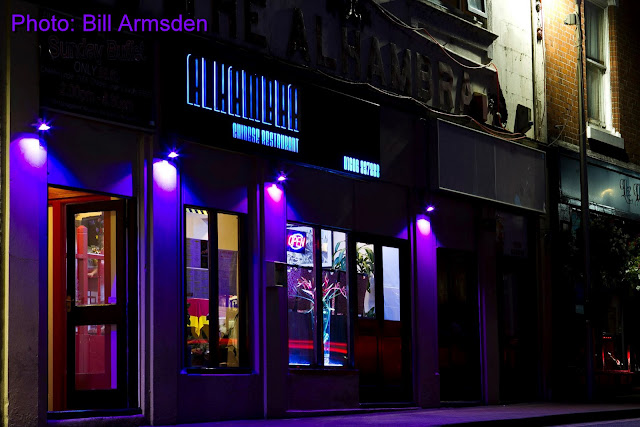 by Dave Roberts
This is one of a series of photographs taken after dark in Middlewich by Bill Armsden, Jim Moores and Tom Harry Johnson as they experimented with various lenses, filters and lighting equipment to produce some remarkable visual effects.
In this one we see the familiar face of the Alhambra building which started life in 1920 as a cinema and  served time as a bingo hall, snooker hall and amusement arcade before becoming a chinese restaurant.
The original Alhambra was a palace in Granada (the one in Spain, not Manchester) and the name translates literally as 'The Red Palace'.
The use of  the name for a Chinese Restaurant may seem a little inappropriate, but it has meant that the building has retained its original name and, just as importantly, the raised lettering on its frontage which has remained there throughout the building's changing fortunes, giving a pleasing sense of continuity.
Notice in the top right hand corner of the photograph how the street lamp adds a little touch of workaday reality to the scene and gives an idea of just how old the building really is, contrasting nicely with the glamorous coloured lighting at the front of the building.
The overall effect of the photo is, simply, stunning.
Posted by SALT TOWN PRODUCTIONS at Thursday, September 13, 2012