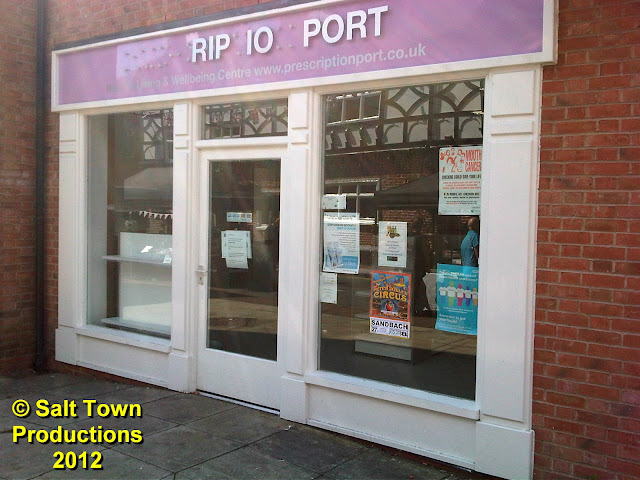 by Dave Roberts
The curious case of the shop which wrote its own epitaph. 'Prescription Port' established itself in one of the shops in the new  housing and  shopping development in Wheelock Street, opposite the White Bear (which can be seen reflected in one of the shop windows as it basks in the warm July sunshine) just a few months ago and closed after less than a year, leaving BetFred as the only surviving business in this rather prestigious looking row of shops.
'Prescription Port' itself is a bit of an enigma. There are (or were) branches in Ellesmere Port, Runcorn, Winsford and Sandbach and it is obviously, as the name implies, a firm of chemists.
But why it should be thought that there was room for a third chemists shop in this small town, with the trade so obviously firmly sown up by Rowlands, is not clear.
Then again perhaps the competition from Rowlands was not the real reason why the shop closed - that website address brings up the name DAVID STEARNE LTD, a pharmaceutical wholesaler which also owned a chain of pharmacies but was forced to go into receivership a short while ago.
The metal sign started to fall to pieces almost as soon as it was erected and, by the time the shop closed, the first part of it read, as can be seen in the photo, RIP.
Perhaps it would be a kindness if someone removed the other remaining letters?
On a lighter note, you will notice the poster for Peter Jolley's Circus in the window.
Whoever distributes these circus posters would be worth a fortune to any publicity firm. The posters end up almost literally everywhere, including places where most people don't even realise there are places...
Observant readers will be able to date this photograph exactly, because also reflected in the shop window is one of the stalls belonging to the Artisan Market.
Our picture must, therefore, have been taken on the 28th July 2012.

Jain Talbot: Such a shame, as the staff were really nice and you didn't have to wait ages!