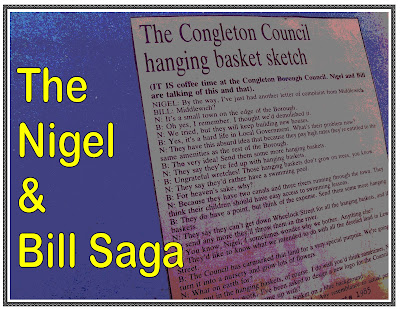 SEND THEM SOME MORE HANGING BASKETS!

by Dave Roberts
There's a perception in Middlewich - maybe it's more than a perception? - that the town is pretty hard done by when it comes to local government services and amenities.
It was, of course, ever thus. There are those who would say that, with the latest council re-organisation, Middlewich  merely progressed from being the 'forgotten town of Congleton Borough' to being 'the forgotten town of Cheshire East'.
Back in August 1985  the old Congleton Borough Council, of which Middlewich was an anomalous, unlikely and (as far as its people were concerned), somewhat unwilling part, was only eleven years into its thirty-five year history.
Many people thought that Middlewich was getting 'a raw deal' from Congleton, paying high rates (forerunner to the present Council tax) and getting little in return.
At that time, it so happened that I had recently been studying the art of comedy scriptwriting - the rhythmic sequence of a scene; conciseness, the importance of characterization and all the rest of it.
One of the exercises was, unsurprisingly, something along the lines of  'write a short comedy sketch involving two characters and tackling a topical issue in a humorous way'.
So I had a go, and Nigel and Bill were the result. In the first draft, they were called Neil and Clive, fact fans, but the names didn't sound authentic. 'Nigel' of course, is a name just made for local government and 'Bill' became his partner as an oblique reference (it says here) to the fact that 'Bills' were all you ever seemed to get from the council.
I was reasonably pleased with the result, gave it the title 'The Congleton Council Hanging Basket Sketch' and decided to send it to the editor of the Middlewich Chronicle (being careful, as always, to retain the copyright) to see what he thought.
To my (slight) embarrassment, rather than giving me his opinion, good or bad, said editor merely published the entire thing on the letters page.
The hanging baskets mentioned were an early attempt to 'smarten up' the town centre at, it seemed to me, minimal cost to the council.
Thus the council could be seen to be 'doing something' about the eternal shabbiness of poor old Middlewich.
The trouble being, of course, that the hanging baskets were the only idea they seemed able to come up with, and the town soon became festooned with the things. 'One trick pony' is the phrase that springs to mind.
The 'Hanging Basket Sketch' was just the first in a whole series of Nigel and Bill sketches published in the Chronicle, featuring ever more elaborate council schemes aimed at doing poor old Middlewich down and keeping all the money in Congleton.
One sketch was written for radio and was recorded by myself and a member of the town council for broadcasting on community radio (this was long before the days of the now-defunct Cheshire FM).
But this is the sketch everyone remembers. At the time and ever since, when the subject of Middlewich and its place at the bottom of the Council pecking order has been raised, 'Send Them Some More Hanging Baskets!' was, and is, the cry.
To its eternal credit one department of the old Congleton Borough Council joined in with the joke and sent out Christmas cards featuring hanging baskets one year (presumably 1985). Or so I was told. I never saw one of these Christmas cards. If anyone has one, I'd love to borrow it.
So let's go back  twenty-seven years to remind ourselves that the more things change the more they stay the same,with the original sketch which kicked off the Nigel & Bill Saga:

(IT IS coffee time at the Congleton Borough Council. Nigel and Bill are talking of this and that.)

BILL: By the way, I've received another letter of complaint from Middlewich?

BILL: It's a small town on the edge of the borough.

NIGEL: Oh yes, I remember. I thought we'd demolished it.

BILL: We tried, but they will keep building new houses.

NIGEL: Yes, it's a hard life in local government. What's their problem now?

BILL: They have this absurd idea that because they pay high rates they're entitled to the same amenities as the rest of the borough.

NIGEL: The very idea! Send them some more hanging baskets!

BILL: They say they're fed up with hanging baskets.

BILL: They say they'd rather have a swimming pool.

NIGEL: For Heaven's sake! Why?

BILL: Because they have two canals and three rivers running through the town. they think their children should have easy access to swimming lessons.

NIGEL: They do have a point, but think of the expense. Send them some more hanging baskets!

BILL: They say they can't get down Wheelock Street because of all the hanging baskets, and if we send any more they'll throw them in the river.

NIGEL: You know, Bill, I sometimes wonder why we bother. Anything else?

BILL: They want to know what we intend to do with all the derelict land in Lewin Street.

NIGEL: The Council has earmarked that land for a very special purpose. We're going to turn it into a nursery and grow lots of flowers.

BILL: What on earth for?

NIGEL: To put in the hanging baskets, of course. I do wish you'd think sometimes, Bill. Anyway, back to work. I've been asked to design a new logo for the council.

BILL: And what have you come up with?

NIGEL: It's an enormous great hanging basket on a blue background...

(All characters are fictional. Any resemblance to actual persons, living or dead, is coincidental)
First published in the Middlewich Chronicle on 22nd August 1985