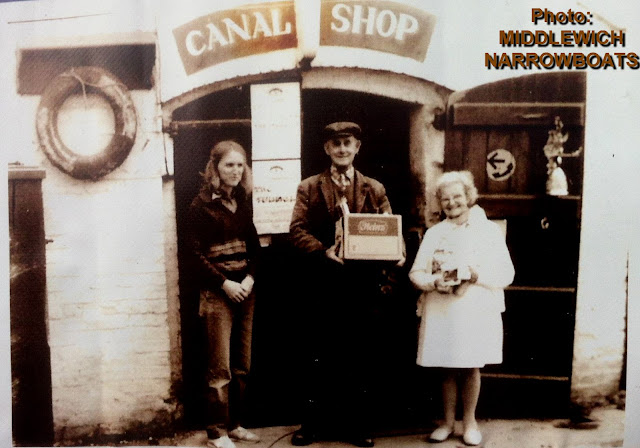 Here's an interesting photo which Middlewich Narrowboats have kindly given permission for us to use here, after posting it on Facebook and asking if anyone could identify the people pictured, and the approximate date.
The location is easy enough to identify and, as Middlewich Narrowboats says, looks very much the same now as it did when the picture was taken.
Its the canal shop at their premises which has, in fact looked like this for many many years.
But what's happening in the photograph, who are the people, and when was it taken?
The girl on the left has rather a look of the early 1970s about her. Does anyone recognise her?
It looks to me as if she's just presented the lady and the gentleman to her left with the things they are holding proudly for the benefit of the camera.
Have they, perhaps, won a raffle or a competition?
The gentleman looks very familiar, and he has the look of a Middlewich man, quite possibly a Middlewich boatman.
I've seen that face before, or one very like it. Does anyone know him?
And what of the lady? Is it his wife? Or is it, as has been suggested, a member of the Cliffe family, who ran the firm before the present owners?
In the background is what looks like a poster of some kind. Can anyone decipher the wording?
I think the first word is 'The', but what's the word underneath? Could it be 'tunnel'?
If you can help with this in any way, don't hesitate to get in touch, either by posting a comment here, or on Facebook.
Alternatively, you can e-mail us on:

Many thanks once again to Middlewich Narrowboats for permission to use the photo.

Diane Russell: I think the man is Mr Bunn. He was a boater, and his son lived in Rosemount. His daughter-in-law worked at RHM. I think his son was called Bill and the daughter-in-law was Phylis I think. She was quite a tall lady with black hair, and they owned a boat.

Robert Sheckleston: Yes, that is Mr Bunn, His daughter-in-law Phylis worked on the salt floor at RHM

Stephen Dent: It is Fred Bunn that lives up Rosemount. The young lady looks very much like Chris Cliffe's partner but if it is she has never aged as she still looks like this. She is American (or Canadian, I can't remember).

Diane Russell: I think you might be right about him being called Fred, not Bill. The young lady is Brenda Cliffe. The Cliffe's bought the boatyard from Willow Wren Kearns in 1982, so it must have been taken shortly after. I recently talked to Raymond Kearns and he told me that was when they sold it, and that Brenda Cliffe was Canadian. He also confirmed that the Bunn's were a boating family.