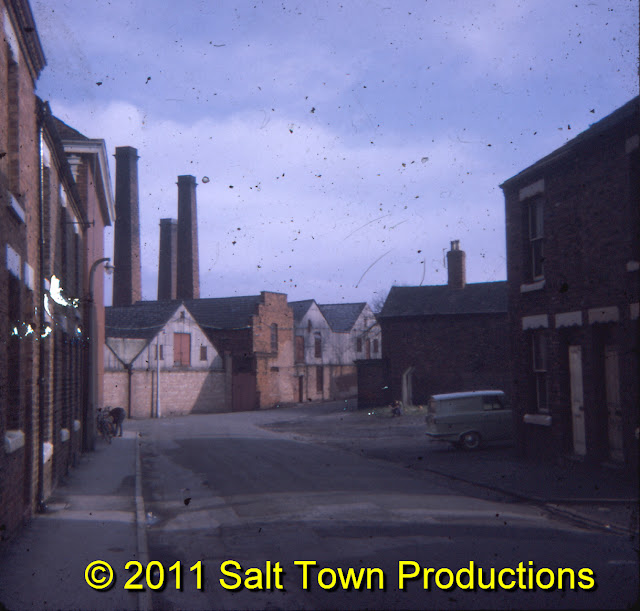 Once again we find ourselves in Pepper Street in 1969 with a picture which should help to make the layout of things clearer.
(The white 'flashes' to the left, by the way, are caused by damage to the original Kodachrome film, illustrating all too clearly why we need to preserve this collection wiihout delay). The houses to the left are what now makes up modern-day Pepper Street. For the first time, at the end of the row, we can see the side wall of Seddon's office building. On the right of the picture is the end of the row of cottages which have been replaced by our famous 'grass verge'. What's the building to the left of them with the tall, central chimney, just above the Robin Reliant?


This photo was first published on Facebook on 26th April 2011.


Geraldine Williams Oh yes! that side wall of the Seddon's offices was the perfect place to hone one's twosie, or even threesie, tennis ball skills! Not sure about the other building. Some demolition had obviously taken place where the chain-link fencing stands (and the forlorn figure sits!) so it's a bit out of context for my recollection.

Dave Roberts I've been waiting for someone to tell me it's not a Robin, but a Regal Supervan or something.Colin Derek Appleton Is that building the pub that was called the Lord Hood ?

Geraldine Williams Yes, according to Google.

(Editor's note: In fact subsequent research indicates that the Lord Hood actually stood on the waste ground where the Reliant car (can be seen).

Colin Derek Appleton Cool! cant take all the credit though, my dad told me the locations of all the vanished pubs when i was a boy !!

Geraldine Williams I understand that the pubs near the salt works used to open at 5.00am to enable nightshift workers to re-hydrate after working on the open pans.

Colin Derek Appleton That's very possible. My Grandfather worked on the pans in the Pepper Street works as well as working for Seddon on his fleet of boats.