WHERE AND WHAT IS SNJ? 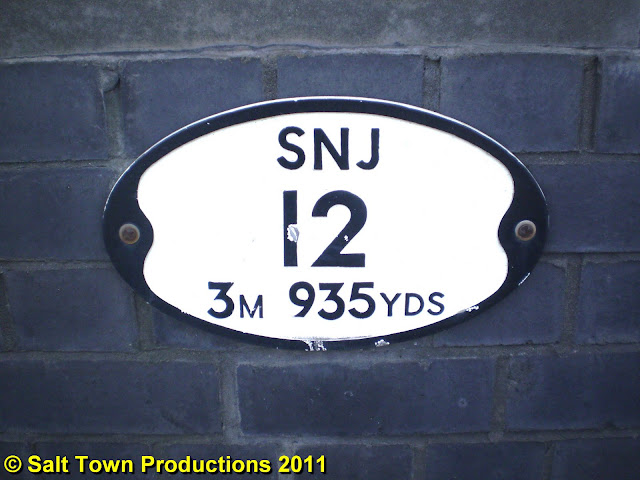 When this was first published on Facebook at the start of June 2011, we presented it as a bit of a 'puzzle picture'.

A bit of a puzzle picture today. Where is this sign? There are various clues: one is the blue brick to which the sign is attached; another is the pleasingly traditional design of the sign and a third is the lettering which does, in fact, tell you exactly where the sign is if you know what 'SNJ' stands for. Despite its rather old-fashioned look the sign hasn't been there very long (probably about 7 or 8 years) and, finally, thousands of people pass it every day.


This picture was first published on Facebook on 2nd June 2011. Below is the original feedback. If you haven't seen this before, why not try to figure out what 'SNJ' means before reading on?

Dave Roberts Sorry, Tim. No and no.


Dave Roberts Correct, Tim. So you've only the 'S' to figure out. You obviously already know what kind of sign this is.


Sherry Hill-Smith Sandbach north junction in 3 miles & 935 yards? But where it is - don't know. Can't come up with a blue building is it a train sign or a canal sign?


Dave Roberts Very good, Sherry. 'SNJ' is indeed 'Sandbach North Junction' (Sandbach South Junction disappeared many years ago). The blue brick is the brickwork of the Holmes Chapel Road bridge, close to where the old station was and, indeed, close to where the new station will be. I've always thought it odd that this sign, which is obviously for the benefit of railway personnel, should be on the 'road' side of the bridge rather than the 'railway' side. Railway distances are still measured in miles, yards and chains, btw.


Tim Moon Bridge plates are often on the outside as maintenance staff would often travel to a site on the road.

Dave Roberts In fact, there are at least two of these signs on the bridge; the one shown in our picture, and one on the 'Northwich' side of the bridge at track level. This can just be made out on the photo included in the 'Subterranea Brittanica' link below.