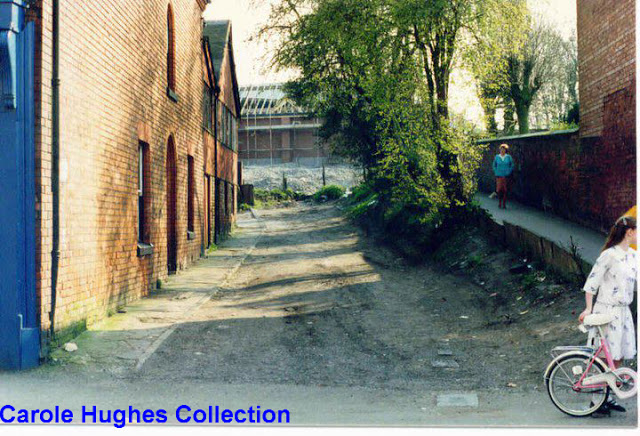 Southway in 1987 (photo by Diane Parr). The dirt track (with rudimentary pavement ) leads to the rear of the buildings to the left, including the Alhambra Cinema (or Bingo Hall as it was at the time the photo was taken). This area was mostly used for car parking. The original Southway (or 'Tannery Alley' to give it its time-honoured name) is the footpath to the right which leads from Wheelock Street to St Ann's Road.
Middlewich's first real supermarket, Gateway, is being built in the background. 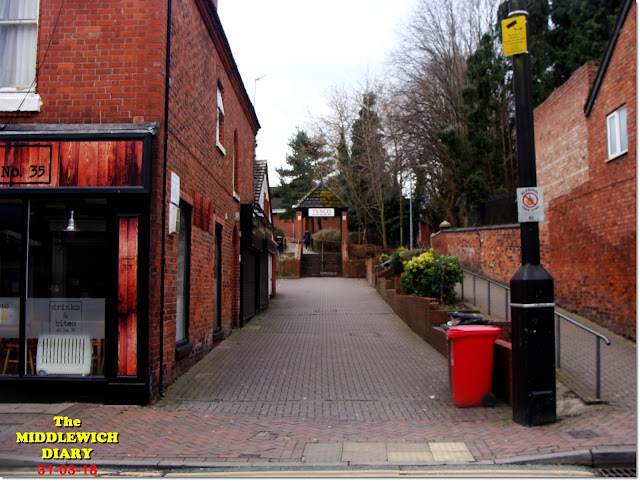 Thirty-one years later and the scene is still recognisable, though much smartened up. Southway still runs up the right hand side of the photo, on its way to St Ann's Road but the buildings to the left have been incorporated into Wheelock Street's shopping area, with a hairdresser and florist where that rather grim looking industrial building, at one time a workshop for Vernon's furniture shop, once was. The recently refurbished and hugely successful Drinks & Bites At No 35 which was, until the 1970s, Vernon's shop, is on the left. The grim-looking oversized 'lamp post' is one of the town's CCTV facilities, forever looking for trouble in Wheelock Street, and the 'pagoda' in the middle distance  welcomes Wheelock Street shoppers to what has now become Tesco's 'superstore' - or, in Middlewich parlance, 'Big Tesco'. (MD Photo)

Update: Once again the changing Middlewich shopping scene renders our information out of date. From October 2018 the sign on the 'pagoda' (and the signs on the store) read 'JACK'S', a low-cost supermarket which is, we're assured, 'part of the TESCO family'.

Email ThisBlogThis!Share to TwitterShare to FacebookShare to Pinterest
Labels: 1987, 2018, SOUTHWAY 1987 and 2018, TESCO MIDDLEWICH.