BRIDGE OVER THE RIVER CROCO August 2011 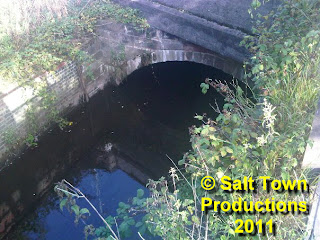 No, not the title of a forthcoming blockbuster movie sequel but a little investigative work following on from this posting in which we looked at Middlewich's old Town Bridge which was replaced by the present one in 1931. The tinted postcard looked to some of us as if the River Croco had almost been airbrushed out of existence and there was some suspicious-looking greenery near the Croco bridge portal which looked a bit artificial..The general concensus of opinion was that the Croco Bridge didn't really look much like a real bridge, but more like a mere culvert designed to accomodate a drainage ditch. Which, of course, is really what the Croco became when the canal was built and the river channelled to run alongside it. I thought that the best thing we could do was to take a look at the bridge as it exists today, and this is what it looked like on the morning of 16th August 2011.
The first thing to notice is that, as Allan Earl reported
*' ...The existing brick arch, over the River Croco, was strengthened by a reinforced concrete saddle' - Middlewich 1900-1950 by Allan Earl (Cheshire Country Publishing 1994)
and here we can see that concrete saddle at the top of the picture and running slightly at an angle to what must be the remains of the old bridge. This concrete section looks to have just been unceremoniously dumped on top of the bridge and to be held in place by its own weight.
The current parapet above this is a fairly recent addition of nondescript white-ish brick, not really in keeping with the rest of the Town Bridge structure. 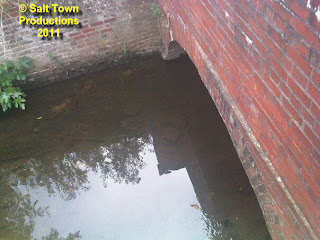 It's also obvious from this photo that the River Croco really is more of a drainage ditch than anything else. The other side of this river bridge emerges a distance away from the Town Bridge in Mill Lane, close to Town Bridge Motors, and the bridge parapet is, if anything, even more nondescript than that on what we might call the 'Town Wharf' side. It's of ordinary red brick. Basically, it must be said that this isn't really a 'bridge' at all, but rather a tunnel under the road. I forgot to check (but will the next time I'm in the area) if the signs saying 'River Croco' are still in place (They're not - see update below -ed). It is still, after all, despite its lowly status, a river. The third picture attempts to show the relationship between the main Town Bridge and the Croco Bridge incorporated into it. I'm afraid that this photo isn't particularly good, but you can, I hope just about make out the Croco in the foreground and the Town Bridge dazzling white in the early morning sun. On the extreme right is that rather inappropriate 'white-ish brick' above the Croco bridge portal. 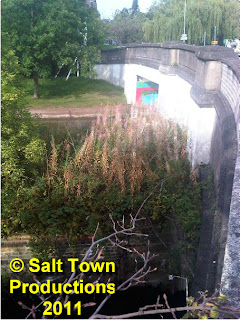 UPDATE: I was in the area for an MRLC meeting on August  30th and have to report that, sadly, the blue and white RIVER CROCO signs which adorned this most humble of all river bridges have now disappeared -ed.
Posted by SALT TOWN PRODUCTIONS at Tuesday, August 16, 2011