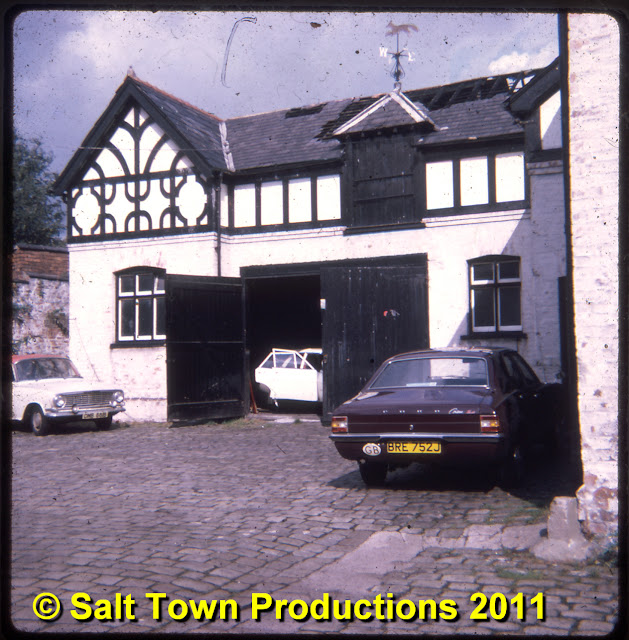 Actually, the original title given to this slide was 'Rear of the White Bear' but there are too many smart alecks on the internet for that to go unnoticed, so we've changed it slightly. At the time of writing (August 2011) the White Bear itself is undergoing a much-needed refurbishment and so we thought we'd take a look at the old stable block at the rear of the building. In 1974 the lower part of the building was being used as a garage - its main use, we suspect, for a very long time before the time of the photograph. The upstairs area was used for many years as a clubroom for various Middlewich clubs and societies including, in the 20s and 30s, the Middlewich Ramblers cycling club, the revived version of which my Dad was a founder member. I still have one of the club's original enamel badges, with a description in his handwriting, which will feature here before too long..Since the 1970s, of course, these buildings have been used for various purposes as shops, offices and showrooms. The upstairs room was even, for a period, an art gallery. At one time an attempt was made to gentrify the area by giving it the name 'Lady Anne's Court', but this was obviously so appallingly and mind-bogglingly twee that it had to be abandoned*. I'm not sure what the state of play is at the moment, with these buildings. I think that NFU Insurance still use part of them. But it's time, I think, for another photo showing the area today. Who knows, with the transformation of the pub itself, big changes may be coming soon
* Well, actually, it wasn't. A recent (2011) visit to the area revealed that the 'Lady Anne's Court' sign is still there.
Facebook feedback:

Geraldine Williams I can remember (but don't know what year it was) someone setting up tables and chairs by the entrance as Middlewich's first attempt at continental cafe culture. Oh no! Don't say that was the clue to Sharon's mystery cafe all along........!
Posted by SALT TOWN PRODUCTIONS at Saturday, August 06, 2011