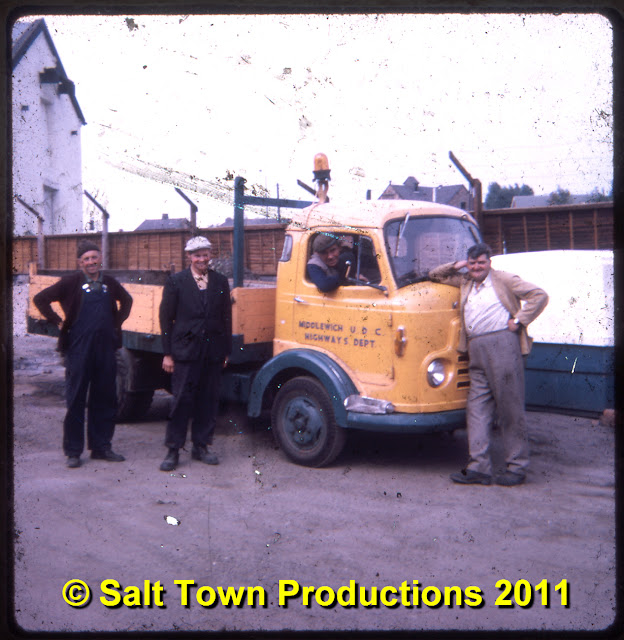 On a Mid-September day in 1973 the gentlemen of Middlewich Urban District Council's Highways Department (or 'Council Road Gang') pose for a commemorative picture at the council's Wych House Lane Depot where once lumpmen, lofters, wallers and firemen toiled to produce Seddon's Salt. In the background the end of the BWB Warehouse can be seen, close to where our favourite footbridge once made landfall.
Although I had by this time left the Council's employ and was doing my compulsory two-year's service at Pochins before stumbling into the welcoming arms of ERF Ltd, I was still interested in what was happening with the local council which had given me my first job. And what was happening, of course, was that it was being wound up in preparation for the creation of the District of Daneborough (The name 'Congleton District' was a last-minute change) in April 1974.
The road gang were, as can be seen, only too pleased to be recorded for posterity with their tangerine and delft blue lorry. Unfortunately time has (temporarily, I hope) erased the names of all but one of them from my mind, but I'm sure we'll be able to identify them all without too much trouble.
The one name I do recall, of course, is that of the gentleman leaning nonchalantly on the front of the vehicle. It's the legendary Stan Durber, known to one and all as 'Stan The Stop-Go Man' for his dextrous work on the red and green 'Stop-Go' signs which were set up to guide traffic around road works.
By no means as easy a job as it sounds. I've seen modern-day practioners of the art of the 'Stop Go' sign (yes, they are still used) at work and it seems to be all too easy to end up with greens or reds at both ends.
Stan, rather unexpectedly, emigrated not long after the re-organisation having, presumably, been made redundant.
The road gang was only really equipped to make small repairs to Middlewich's roads. But what an excellent  job they would have made of making good the pot holes caused by the last two harsh winters. Pot-holes were their speciality.
Interestingly in April 2010 Cheshire East Council announced its intention of contracting out all Highway Maintenance to the private sector.
Posted by SALT TOWN PRODUCTIONS at Friday, August 19, 2011