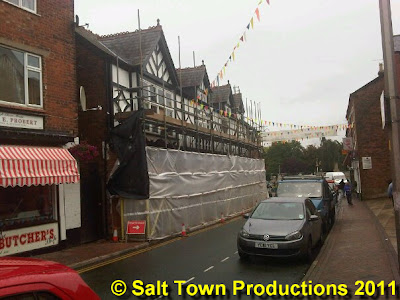 Here's the White Bear in Wheelock Street as it looked on the 4th August 2011. This town centre pub has had a...er...chequered career over the last few years ending up as a 'kid's pub' to rival the nearby Vaults and the now departed 'Cat's Bar' at the other end of the street. An undignified use for such a potentially attractive pub. Now, as can be seen, it's being given what I suppose we'll have to call a 'makeover', and a really substantial one. Even the white rendering on the walls has been removed. The black and white woodwork was patched up a couple of years ago but appears to be receiving more attention now and being upgraded to a very high standard, with certain period details picked out in gold. More than this we can't say, as we could only give the place a cursory glance in passing.
Word on the street - well, on Wheelock Street at least - is that the White Bear is to become what's usually called a 'gastropub' (surely there must be a better, less queasy-sounding term?) serving high class food in high class surroundings.
The bunting and banner, by the way, are left-overs from the Middlewich Transport Festival on the 23rd and 24th July.
Posted by SALT TOWN PRODUCTIONS at Sunday, August 07, 2011