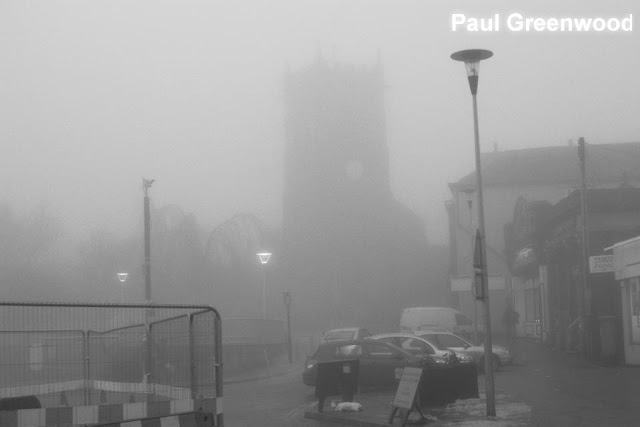 A foggy day in old Middlewich town in February 2012, captured in this beautifully atmospheric shot by Paul Greenwood. The Church of St Michael & All Angels  can just be glimpsed in the background and, to the left, the lights of the amphitheatre glow fitfully through the gloom.
As ever cars jostle for position outside the Tesco Express and, a little further up Hightown on the right, we can just make out the outline of the former Fitton's/Vernons butchers shop, now home to the Balti Spice takeaway.
In the foreground is evidence of the work being done by National Grid all along Wheelock Street to replace ageing metal gas pipes with plastic ones.
Looking, if anything, even more out of place than usual, on the right, is one of those ghastly street lamps dubbed 'glorified patio heaters' (probably by me) which so disfigure our town centre with their plasticky cheapness.
Let's hope they prove to be as temporary as the road works. 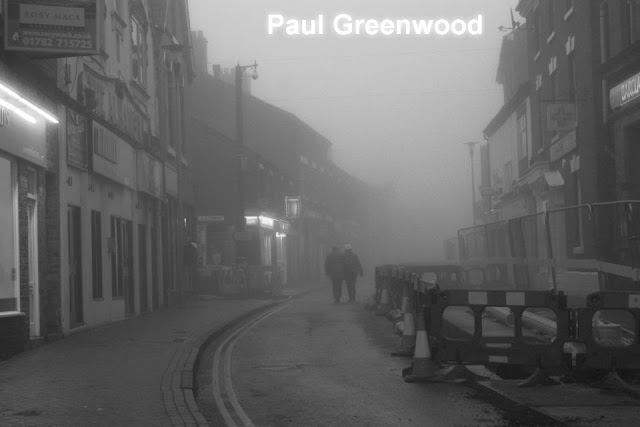 A short distance away, in Wheelock Street, further evidence of the National Grid's endeavours can be seen on the right and, to the left, the lights of Reed Rains Estate Agency and Bargain Booze glow almost eerily through the fog. Also on the left can be seen the Alhambra, the town's second cinema, built in the 1920s, with its ornate facade, and its name, thankfully preserved. The building is now enjoying a new lease of life after being a cinema, bingo hall and amusement arcade in its time.
The amusement arcade, it will be remembered, was, like most things associated with the youth of the town, going to bring hellfire and damnation down on us all, and mean the end of civilisation as we know it.
Strangely, it never happened and now it's a Chinese restaurant - probably the only Chinese restaurant in the country named after a Moorish palace in Spain.
It's almost possible, looking at this picture, to imagine oneself back in the Middlewich of a hundred years ago.
Despite all the changes over the years, Wheelock Street is still recognisably the same place we see in pictures from 1912 and even earlier.
The fog, and the black and white photography, lend a timeless quality to the scene and, on days like this, all our Middlewich ghosts come back to haunt us.

Paul Greenwood WOW!!! Thanks ever so much mate - I'm on the cover of Salt Town Productions. :)


Dave Roberts Very prestigious indeed. Talent will out, though. There aren't many people who could have taken those pictures, you know.

Geraldine Williams Terrific pic Paul, very atmospheric. All it needs is a couple of hansom cabs and Jack the Ripper lurking in Vernon's doorway.........!!