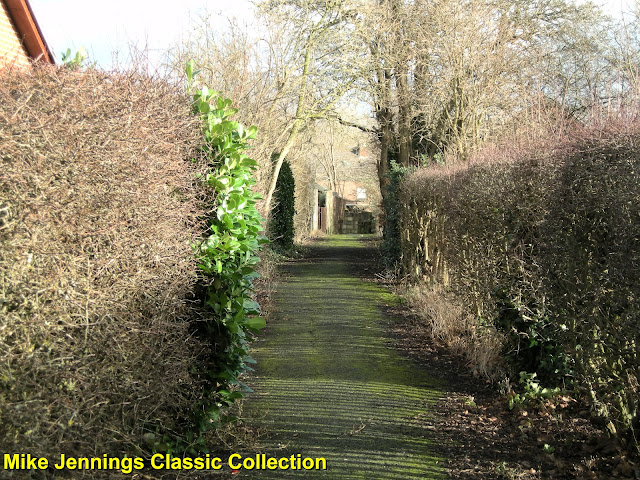 Mike Jennings was out with his camera at the start of 2012 to bring us these pictures of White Horse Alley which, for those who don't know, runs from Lewin Street (alongside the pub which gives it its name) and past Market Field (best known these days as the venue for the Middlewich FAB Festival) to join with St Ann's Walk immediately adjacent to the Oaklands Medical Centre.
The right of way then continues across the High School's car park and around the back of the Sports Hall to eventually reach St Ann's Road.
At one time pedestrians could take a more direct route through the school grounds, but this was never popular with people who at times had to run the gauntlet of some  cheeky and appallingly bad-mannered schoolchildren.
When Mike originally sent these photos to us in January, he was asking if anyone knew why White Horse Alley had been blocked off at both ends.
Seemingly, the answer is quite obvious: it's been sealed off pending the start of work on the extension to the aforementioned Oaklands Medical Centre in  St. Ann's Walk which, since there seems to be no sign of the work in question starting, would appear to be something of a premature move.
The main picture (above) shows the alley looking towards Lewin Street. Part of the Wych Centre on Market Field is just visible top left.
This part of White Horse Alley was always a good short cut from Market Field to the White Horse during the original Folk & Boat Festival. The festival's compere could make it back to the mainstage in less than a minute after a Festival Saturday afternoon drinking session with Jerry at the pub.
I know, I was that compere.
The alley does not run in a straight line; there is an S-bend close to the remains of the little houses which once fronted onto the alley (see below).
On the other side of the hedge on the right is a field where Mr Smallwood, who lived nearby, kept sheep.
It was the presence of those sheep just yards away from the main Folk Festival site which led, among other considerations, to the cancellation of the 2001 Folk & Boat Festival in the middle of a Foot & Mouth Disease outbreak.
The risk was just too high.
Some have claimed that 'the festival went ahead anyway' because a couple of pubs held music sessions.
Not so. A couple of sessions in a couple of pubs do not a festival make. 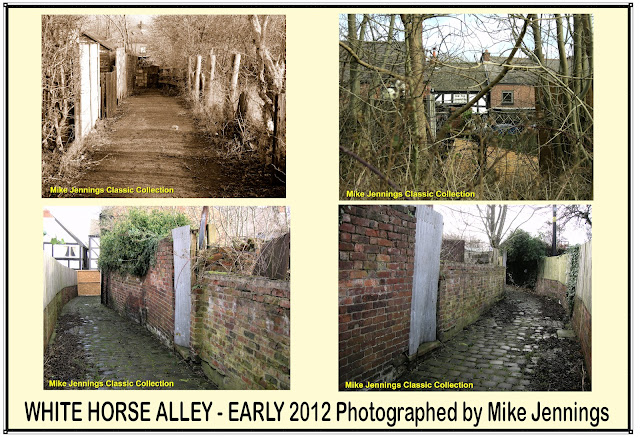 Mike's other photographs show (clockwise from top left): 1: A little further down the alley, towards Lewin Street. Some of the gates, fences and sheds of the gardens of Rosemount, backing onto the alley, can be seen on the left; 2: The view across the top end of what was once Mr Smallwood's sheep pasture looking back towards the property across the road from the White Horse in Lewin Street; 3: The last remains of the cottages (at least one of them a serious rival for Conway's 'smallest house in Britain' claim) which once fronted onto White Horse Alley, looking up towards the start of that 'S bend' 4: The same properties seen looking in the opposite direction, towards Lewin Street. the late Mr Smallwood's house is on the opposite side of the fence on the left. The barrier recently erected to prevent access from the Lewin Street end of White Horse Alley can be seen centre left. The White Horse pub itself is immediately to the right of it.
White Horse Alley is sometimes erroneously referred to as a 'cobbled alley'. Those are not cobbles, but setts - square shaped dressed stones, much more uniformly sized than cobbles and giving a smoother surface.
Many of Middlewich's main streets were laid with setts, and they're still there under the modern Tarmac surfaces.
Whenever the roads need to be dug up it's possible to see the original setts.
Which, Middlewich being the way it is, means that the opportunity arises very frequently indeed.


Here's an older photograph of the Lewin Street end of White Horse Alley, showing those tiny cottages before they fell into complete disrepair. This comes from our diary entry 'Now & Then: White Horse Alley' which can be found here 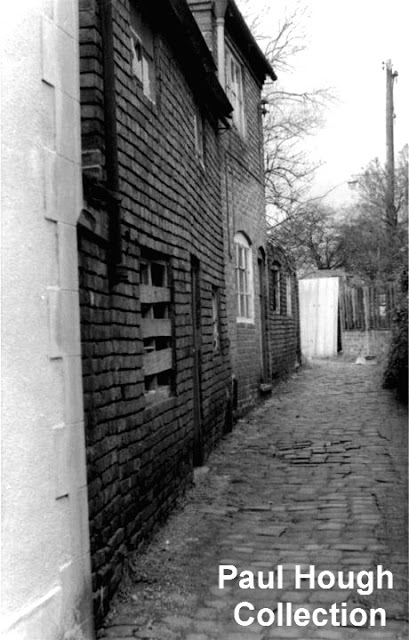 Facebook feedback (from 'You Know You're From Middlewich, When...'):


Cat Cotterill My Nan used to live next door but one to the alley, and I can remember her taking my cousins and I to the smaller field behind the White Horse to see John's cows.
Also I can remember the fair moving to the field behind that (which I believe now has tennis courts on) (Quite possibly Cat means the all weather football pitch at the top of the alley - Ed)


Daniel Preston I remember windows in the cottages along there, the glass green and bulging at the bottom, the sound (sic) having slowly succumbed to gravity over the centuries.


Andy Kendrick The cottages which used to be on White Horse Alley were where my parents used to live when they had just married. My Dad told me some good stories about the characters who used to knock around in those days.