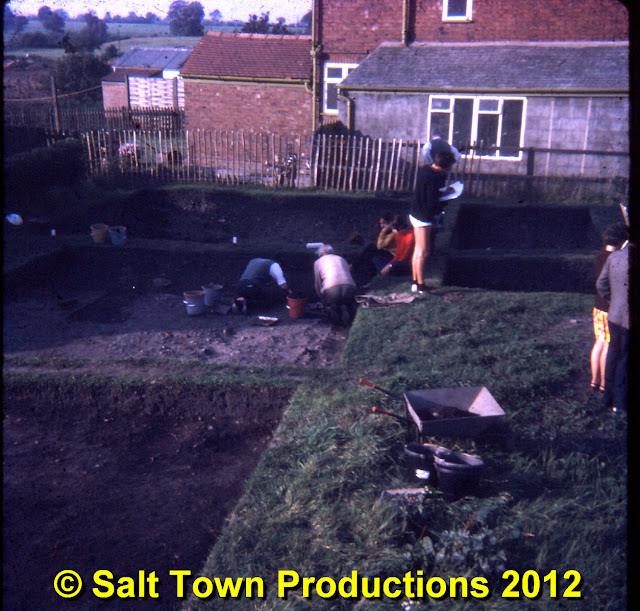 by Dave Roberts
On a warm afternoon in the Summer of 1968 members of the Middlewich Archaeological Society work on one of the Society's digs in King Street.
This particular site, long since built over, was at the very top of the public footpath, known to us all in those days as 'Bill Hewitt's', which ran, and still runs, from King Street  past the 'Stone Houses'  and along the River Croco to a point just on the south-west corner of Harbutt's field where two footbridges take it, and the other footpath from King Street, across the river and canal at the Big Lock.
The existence of the Roman Fort at Harbutt's Field was not officially confirmed until 1993, when modern geophysical methods were brought into play, but was long suspected, not least by members of the Archaeological Society, of which my Dad was a founder member.
Excavations were made on the field in the early 1920s aimed at establishing the existence of  a permanent Roman fort, which had been the subject of speculation for many years previously, but no evidence of the fort was found.
The excavations the Society made in the years 1964-1969, under the direction of one John D Bestwick, centred around the King  Street area and discovered much evidence of salt, iron and leather manufacturing as well as Roman pottery and coins.
The point was, as my Dad used to tell us frequently, if there was not a major military Roman presence in the area, what was all that industry doing there? Who was it serving?
Several members of the Archaeological Society are pictured above, hard at work.
I suppose it might have been a good idea to line them up and take a proper picture of them for posterity, but they were a little bit touchy about being disturbed during their endeavours.
At least two of them are, it will be noticed, sporting the sleeveless pullover and shirtsleeves look as worn by Percy Thrower on Gardening Club during this period.
The gentleman in the light coloured jumper to the right of the trench is my Dad, Arthur Roberts, and also present on the day, among others, were Middlewich UDC surveyor Donald Stubbs and local schoolteacher Ken Laundon, who lived just across the road from this particular dig.
Behind the camera is the path leading 'down Bill Hewitt's' and the greenery just visible top left is part of the then unspoilt farmers' fields leading up to Harbutt's Field itself.
See also: ARCHAEOLOGICAL SOCIETY 1968 (2)
ARCHAEOLOGICAL SOCIETY 1973
The Heritage of  Middlewich THE JOHN BESTWICK ARTICLES
Posted by SALT TOWN PRODUCTIONS at Thursday, February 09, 2012