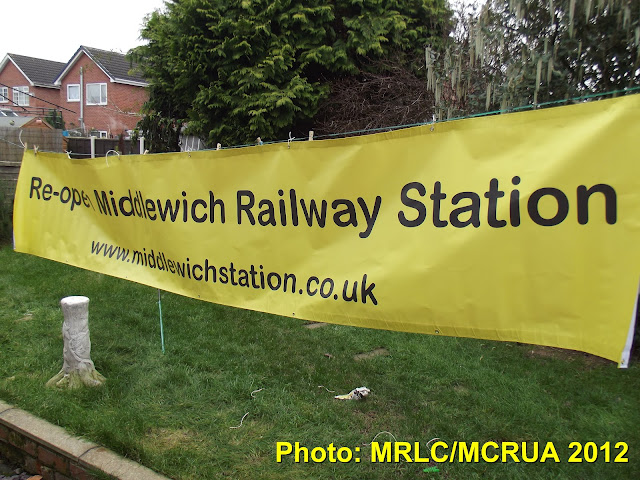 Coming to an event near you this summer is this brand new banner bearing a simple but heartfelt message, as the campaign to re-introduce passenger trains on the Sandbach-Middlewich-Northwich Railway continues unabated.
The banner was commissioned by the Middlewich Rail Link Campaign (MRLC) and funded by Mid-Cheshire Rail Users' Association (MCRUA) and will be displayed at such local events as the Middlewich Transport Festival and the Middlewich FAB Festival.
Several colour schemes were suggested by MRLC committee members for the banner, some of them bearing a striking (but purely coincidental) resemblance to  favourite football team colours, but in the end this black and yellow livery (to use railway parlance) was selected.
Thanks are due to Dave Thompson at Middlewich Town Council for helping get the banner made.
The new website address shown on the banner will be going live in the next few days.
In the meantime, if you're interested in MRLC's plans for a new Middlewich Station, you might like to join the campaign's Facebook group (link below).
Lovers of correct English usage will be pleased to see that the banner refers to MIDDLEWICH RAILWAY STATION rather than MIDDLEWICH TRAIN STATION.