by Dave Roberts
Jim Moores has been out and about recently gathering photographs for his excellent new Facebook page
'The Canals & Rivers of Middlewich' and here he's giving us all a glimpse of one of the three aqueducts in the town - one we've talked about in several previous Middlewich Diary entries but have never had the chance of a proper look at, until now.
Like so many such places around our town, the SUC* aqueduct over the River Wheelock, just yards away from the much better known (for obvious reasons) Nantwich Road aqueduct, is a 'hidden gem'.
It's very similar to the nearby road aqueduct which was built at the same time but, in the case of the river aqueduct, the large sweeping buttresses on either side,with ornamental stone pillars at the end of them are very obvious: 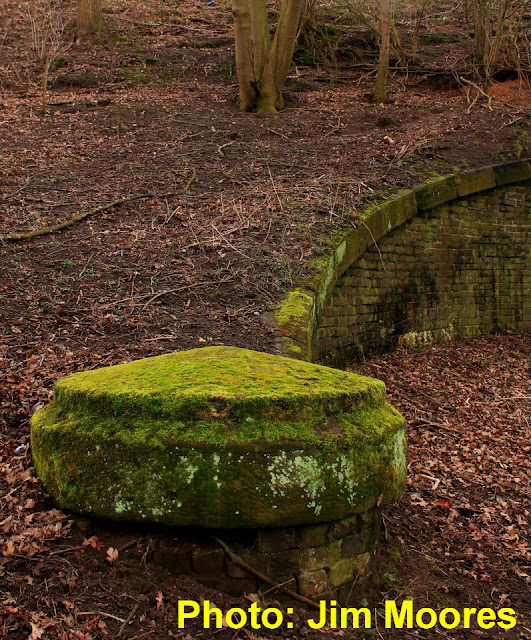 Actually, this is explained very much better by George Nash in Wych & Water (Middlewich Vision 2009):

'At either end of the supporting revetment are curvilinear piers that terminate to form circular roundels. A similar ornamental arrangement is present on one of the surviving piers attached to the Croxton Aqueduct'

The Nantwich Road aqueduct is lacking these stone pillars and the opulent curves on either side of the road, presumably because of space constraints in the narrow cutting in which it lies. According to George Nash (see above), the road aqueduct is, in any case, smaller than the one over the river.
It seems strange, though, that the river aqueduct, out of sight of the general public, should be given these embellishments and the Nantwich Road one left unadorned.
In the early 1960s,when I was still at Wimboldsley Primary School  I remember playing around this aqueduct with a group of friends.
One of our ambitions was to walk through the aqueduct from one side to the other along the middle of the river.
We never did it, as we were unsure how deep the river was.
In those days, just a short distance into the tunnel (both these aqueducts are more like short tunnels,burrowing into the canal embankment, than bridges) on the Wimboldsley side was what looked very much like an abandoned boat.
Another of our ambitions was to rescue this boat, repair it, and  go sailing all around the canals and rivers of Middlewich,like our heroes the Swallows and Amazons.
That never happened either.
Jim's third photograph shows the River Wheelock flowing on from the aqueduct and heading off towards its meeting with the River Dane at Croxton. 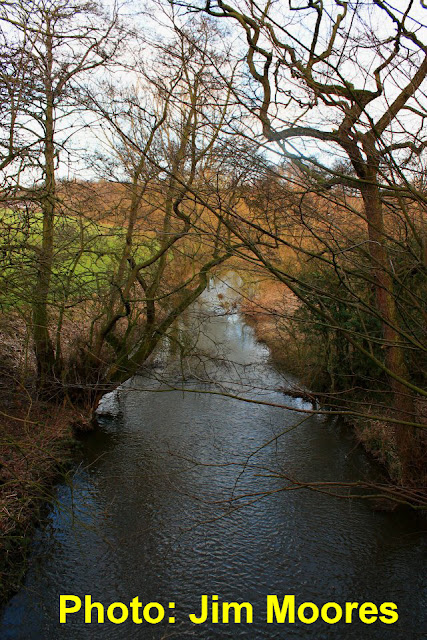 UPDATE (20th February 2017)
When a link to this diary entry was re-published on Facebook in February 2017, Andy Boardman got in touch to say that he too had photographed the aqueduct in 2015. His excellent study, which.gives us an overall view of the structure, is reproduced, with permission, below

Note: This entry started a discussion in the 'comments' section (see below) of a 'tunnel' under the canal in or near Norman's wood.