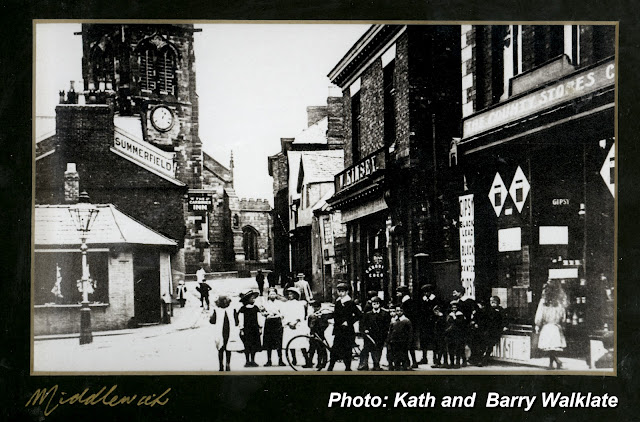 We're very grateful to Kath and Barry Walklate of Warmingham Lane for this beautiful framed photograph of the Bullring, Middlewich, which they came across in a shop in Cornwall while on holiday there about fourteen years ago.
It's rather an unusual photograph which, we think, dates back to around 1908, or possibly even earlier.
The main clue to the approximate date lies in the fact that The Carbineer Inn, halfway up the slope of Hightown (its sign can be seen in front of the church tower) was, according to Allan Earl, forced to close around 1909 because it was out of date and would have been too expensive to modernise. The Junction Inn on Brooks Lane Bridge closed at the same time for the same reason.
To the left of that Inn sign is another shop sign painted, in the fashion of the day, under the eaves of the shop's roof, which, as Kath pointed out when we were looking at the photo, is almost a pointer to  shopping days to come in Middlewich. We're talking, of course, about Summerfield, a name which would make a comeback - albeit with a different spelling - eighty-odd years later when Gateway became Somerfields.
Now, of course, it's Tesco's main Middlewich store.
Across the road from  Summerfields and the Carbineer are a group of very old buildings which would later be demolished to make way for Fitton's/Vernon's butchers (in the 1920s) and the National Westminster Bank (originally the National & Provincial)
Moving to the right we can see Kinsey's Grocery shop.
Interestingly, again according to Allan Earl, it was Mr William Kinsey, owner of this shop and proud possessor of one of the few telephones in Middlewich at that time, who received the news of the Relief of Mafeking on behalf of the town in May 1900. He told the Council of the news and an impromptu torch-lit procession, accompanied by the Centenary Band,  was organised on the spot.
By the 1950s Kinsey's had become Cooper's, as seen here, but disappeared at the end of the 1960s to make way for the Co-operative Superstore, part of which is now Tesco Express.
Next to Kinsey's is the County Stores, with its prominent adverts for GIPSY Brand black lead.
The curly-haired little girl in the doorway, according to Kath, looks very much like her Mother.
And that crowd of children has obviously gathered because of the photographer being there.
In the early 20th century someone taking photographs was a rarity and must have been fascinating to those children.
Cameras in those days were enormous polished wood and brass boxes mounted on equally enormous wooden tripods and used large glass plates instead of negatives.
More than likely the photographer would have had his head underneath the voluminous black cloth necessary at that time for him to see the scene he was photographing, upside down in his ground-glass viewfinder.
The children must have thought him some kind of magician.
By coincidence I walked by the very same spot today with my Blackberry phone snapping digital photos right left and centre, and no one gave me a second glance.
The shop behind that ornate gas-lamp on the left was Lees Butchers (but always called, in Middlewich fashion 'Butcher Lees').
This shop, oddly enough, served its time as the National & Provincial Bank before being demolished to make way for the war memorial in its original setting, the bank by then having built its new premises across the road.*
The gas-lamp itself is interesting. It served to light up the whole of the town centre and was also the traditional place for the Town Crier to stand to make his pronouncements. Originally, before the widespead use of newspapers, these would have included 'news headlines' letting people know what was happening in the wider world, but later became much more localised with news of Middlewich events, sales being held in the local pubs, and all the other information needed to make small town life run smoothly.
Thus our present Town Crier, Devlin Hobson, is carrying out very much the same role as his distinguished predecessor and when he stands under one of the new LED street lamps at the Wheelock Street end of the amphitheatre, he's very much following in the old Town Crier's footsteps. 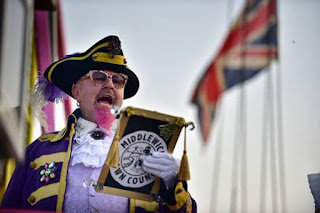 Many thanks to Kath and Barry for letting us see this fascinating photograph.


*UPDATES: What had by 2015 become the National Westminster (or NatWest) Bank on Hightown was, in the late Summer of that year, being converted into a carpet shop. Only the general design of the building betrays the fact that it was ever a bank.
In the event the carpet shop never materialised either and as at Summer 2016, the premises remained empty and waiting to be put to some good use.
Also during the Summer of 2015 our town's one remaining bank, Barclays, announced a reduction in its hours of business - a sign that its days, too, might be numbered, leaving Middlewich with no bank premises at all. A sign of the times.
By March 2018, both our banks had shut up shop; the NatWest had become a furniture showroom, and the Barclays branch, which closed in 2017, remained empty.