MEMORIES OF A BOAT WOMAN

At 2pm on Saturday 23rd March 2013 people gathered at Wardle Lock in Middlewich to witness the unveiling of a special plaque created to honour Wardle Lock Cottage's never to be forgotten former resident 'Auntie' Maureen Shaw. Bill Armsden was on hand with his camera to record the scene. 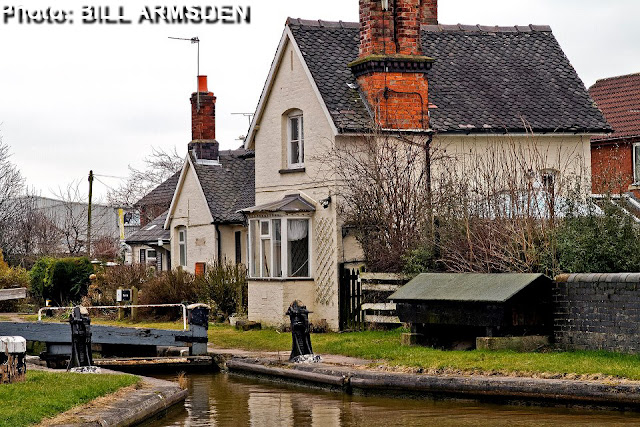 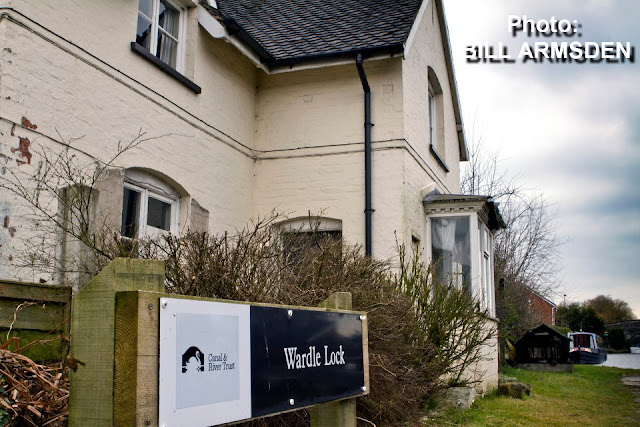 This lock, which joins the Middlewich Branch of the Shropshire Union to the Wardle Canal (Britain's shortest canal) is officially known as Wardle Lock, but many people over the years have come to know it as 'Maureen's Lock'. Maureen was always there with a few words of advice for novice boaters, mixed with a few choice phrases if said boaters wouldn't listen. Note that the sign now carries the Canal and River Trust's logo, a sympathetic re-working of the old British Waterways one. 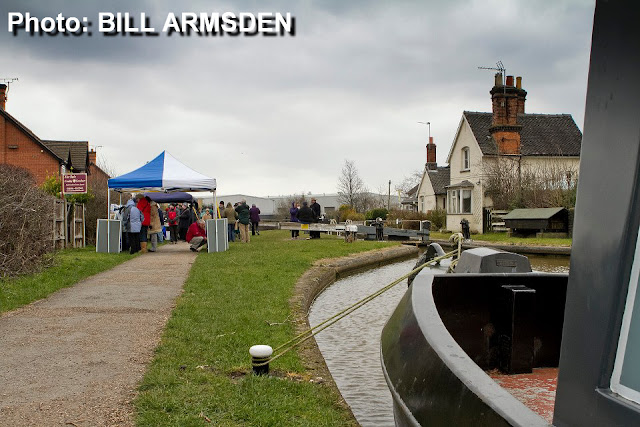 Despite the bitter  weather of the coldest March for fifty years, people turned out in force to listen to the speeches and songs and watch the unveiling of the plaque. Between the two groups of people you can just make out the parapet of the road bridge carrying Booth Lane over the Wardle Canal's junction with the Trent & Mersey. Looking into the distance, what at first appear to be distant hills looming through the mist are, disappointingly, merely the grey outlines of utilitarian industrial buildings on the old ICI Middlewich site. 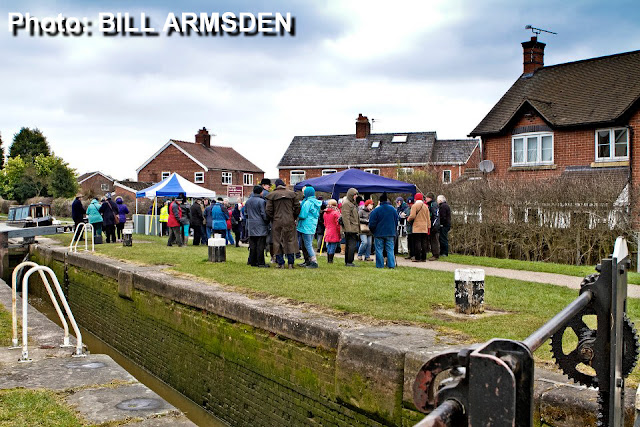 A very good turnout for such a miserable and downbeat sort of day. People from all walks of life  who knew and respected Maureen were anxious to attend and demonstrate their affection. 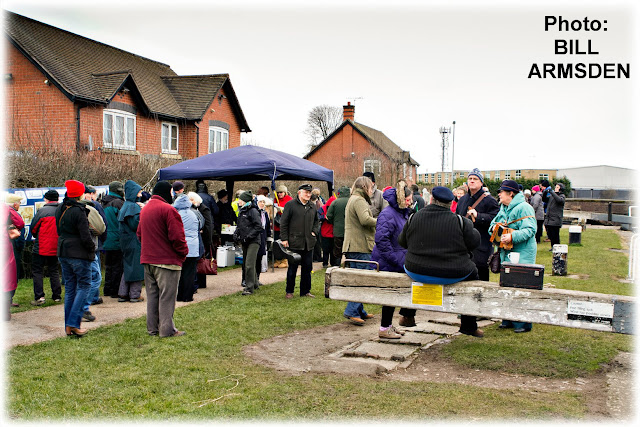 This picture gives a better impression of the size of the crowd which gathered for this rare and special occasion. 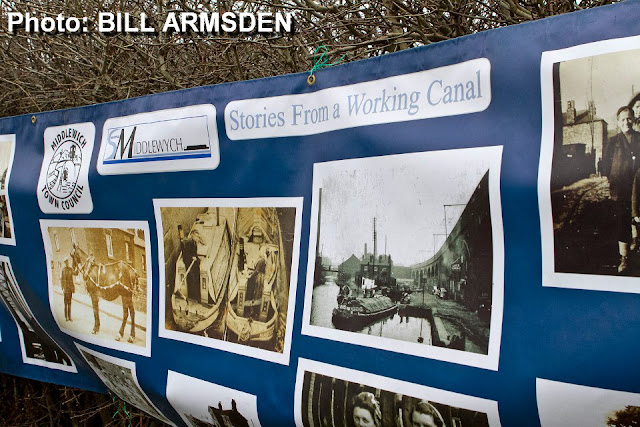 Middlewich Town Council's interpretive banner showing photographs of Middlewich's canals in their working heyday was on display at the event. 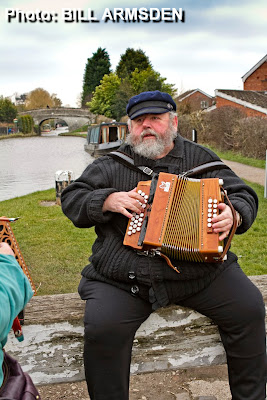 Music always looms large in any Middlewich celebration and this was no exception. Our picture shows melodeon player Benny Graham sitting on one of the lock's balance beams 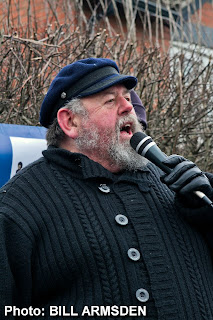 Benny also treated the assembled company to a rendition of  'It's A Hard Life For A Girl On The Cut', which was also sung at Maureen's funeral. We're indebted to local musician and singer Andy Roscoe for this information. 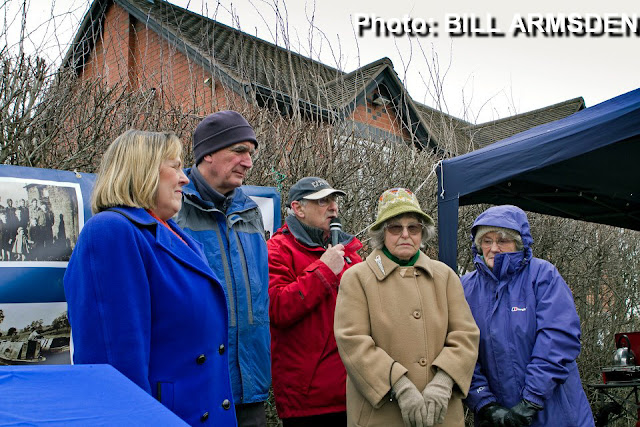 Can anyone tell us the name of the gentleman in the red jacket who acted as the MC for the occasion, and the other people standing here with MP Fiona Bruce?

UPDATE: And here's the answer from the gentleman himself, as appended in our comments section (below):


Someone asked the question in your report as to who the guy was with the red jacket acting as the MC. That was Peter Bolt Project Officer at the time for the IWA Chester and Merseyside Branch (now Chairman). The chap to my left is Brian Phillips IWA Branch Chairman at the time.


A great lady and my privilege to have known her. 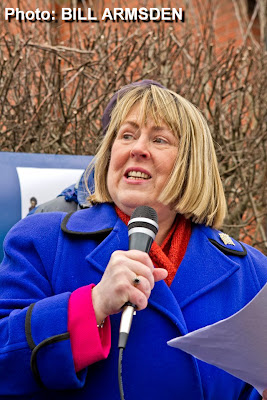 Fiona gave a speech in tribute to Maureen.... 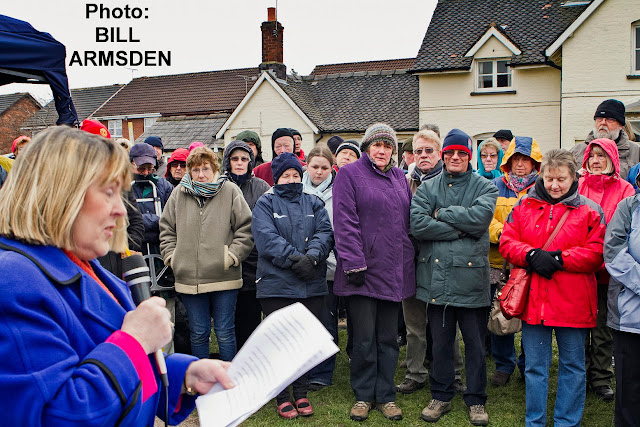 ...as the crowd, suitably muffled up against the early-Spring Middlewich weather, listened with the iconic Wardle Lock Cottage behind them. 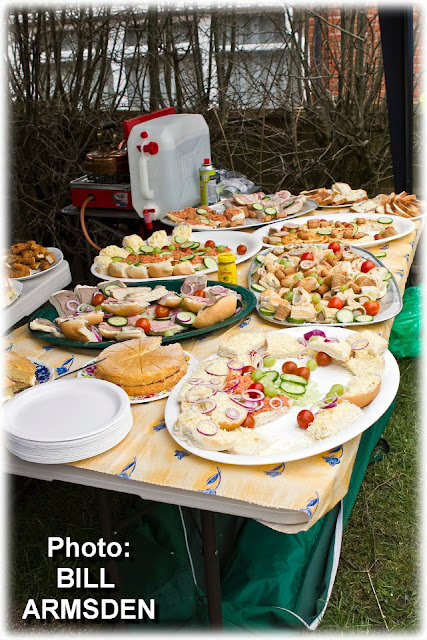 Everyone was fortified by the magnificent buffet provided. 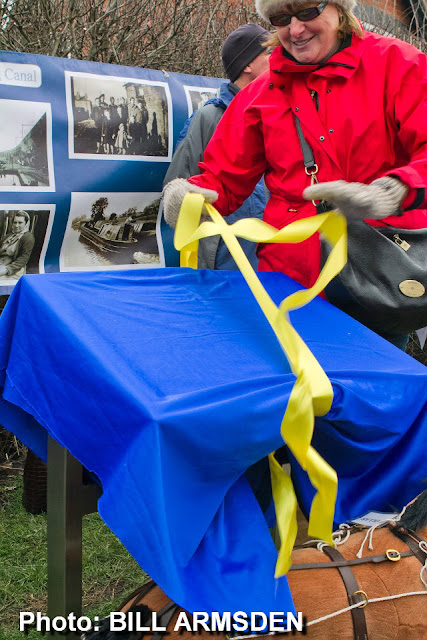 The actual unveiling of the plaque was performed by Maureen's daughter, Sharron Underwood. 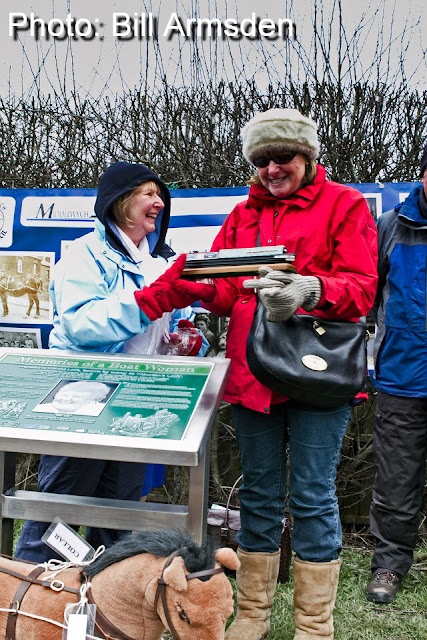 Sharron was presented with a scale model of the Fellows Morton & Clayton boat Ferret by Angela Farrington, who knew Maureen for more than forty years.

Ferret was built in 1926 at Yarwoods and the prototype can still be seen on the waterways of Britain, attending rallies such as Middlewich's own FAB Festival. 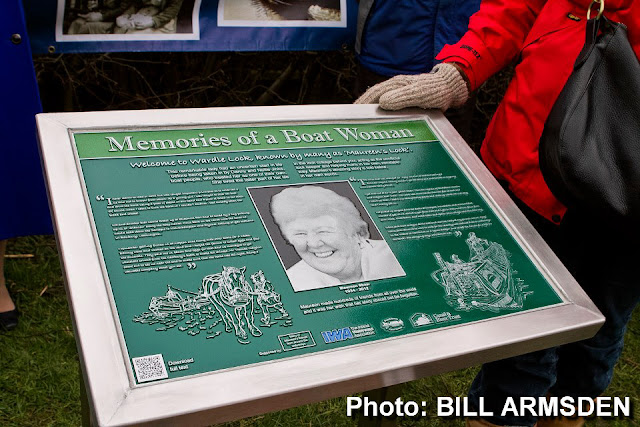 And here is the plaque itself. A worthy and lasting reminder of one of the true legends of the waterways.

After the ceremony a folk session was held at The Boar's Head in Kinderton Street to enable Maureen's many friends to raise a glass in her memory.

Our thanks once again to Bill Armsden for letting us share these photographs; to Andy Roscoe for the  additional information, and to Ian Murfitt for keeping us informed.
If anyone can tell us the names of the other people pictured here please don't hesitate to get in touch.

The Maureen Shaw Appeal was organised by Peter Bolt of the Inland Waterways association.

To find out more about 'Auntie Maureen' go to 'A TRIBUTE TO AUNTIE MAUREEN' (ARCHIVED) and follow the links. 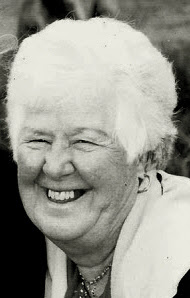