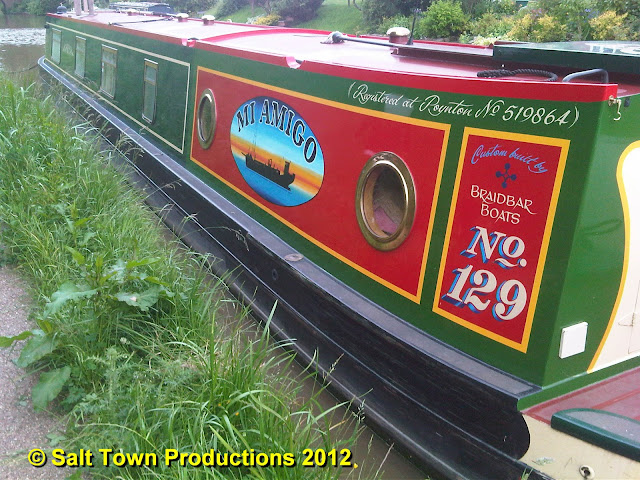 by Dave Roberts
Here's a happy discovery made while on a walk up the SUC Middlewich Branch a few days before the FAB Festival. At first glance just another immaculately turned out pleasure boat, one of thousands which pass through our town every year.
But a closer look at this boat should, if you're of a certain age, love music, and have any romance in your soul, bring a smile to your face.
For this  is no ordinary boat.
It's named Mi Amigo, after Radio Caroline's original pirate radio ship (Update: Actually that's not strictly true. Someone's taken the trouble to point out that the original Caroline ship was the MV Fredericia (or 'Frederica' according to which account you read), later renamed Caroline - see 'comments' below). 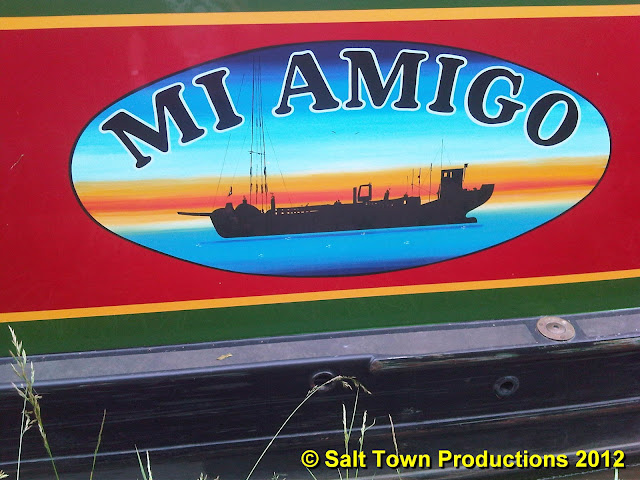 and there's an excellent illustration of that famous (or 'infamous', according to the boat's builders, Braidbar Boats) vessel on the cabin side.

It's fortuitous that the new Mi Amigo should choose to visit our landlocked little town, as it gives us an unprecedented opportunity to give Caroline a plug in the Middlewich Diary.

For Radio Caroline is by no means a thing of the past (although, unfortunately, the original Mi Amigo is - it sank in heavy seas in 1980).

The station can be found broadcasting away merrily on the internet (and various other outlets) and is still actively campaigning for a licence to broadcast on medium wave. 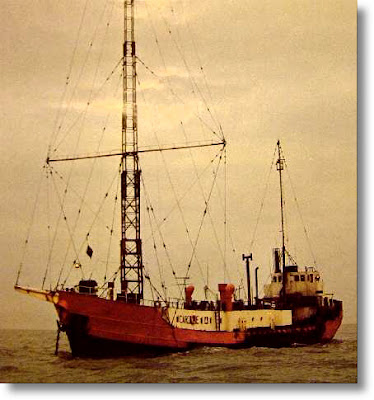 UPDATE (June 2014):  Radio Caroline celebrated her 50th Birthday on the 28th March 2014 (and also at Easter 2014 - like all Queens she has an actual and an official birthday). Many congratulations to all concerned with keeping this broadcasting legend alive -Ed)

UPDATE(August 2017): In May 2017 the Medium Wave  campaign bore fruit and Radio Caroline was given a licence to broadcast to Suffolk and North Essex on 648 Khz, ironically a frequency formerly used by the BBC World Service.

UPDATE (March 2018) Transmissions from Orfordness began in November 2017 and full programmes began at 12 noon on December 22nd.
Orfordness is the ideal location for the station's land-based transmissions. It's just about as close as you can get to the sea while still on land, and transmitter engineers, by all accounts, still have to travel to the site by boat.

And the Radio Caroline organisation still has  a ship, too, the Ross Revenge, which is currently at anchor in the River Blackwater, giving everyone the opportunity to take a tour of the broadcasting station and the rest of the vessel.

You can listen to the station, and find out all about its fascinating and astonishing history, by visiting

THE BRAIDBAR BOATS WEBSITE
(sadly all reference to the Mi Amigo seems to have vanished  since this link was created, but the site still repays investigation)

P.S. If, like me, you're a real pirate radio anorak, you'll know that in the sixties we in the north had our own Radio Caroline broadcasting from a ship called (what else?) Caroline, and anchored off the Isle of Man.
Halcyon days.