From the Paul Hough collection comes this view of Lower Street and Middlewich Town Hall in the late 1960s .
We featured a very similar colour view from 1969 in this Middlewich Diary entry

It's interesting to note that the road alignment at this end of what was to become St Michael's Way is not too different in the photo from the way things are in the present day, with the two traffic lanes nearest the camera guiding people to (from right to left) Holmes Chapel and Sandbach. The road markings are difficult to make out due to the pounding they've received from the heavy traffic which then, as now, afflicted Middlewich. We shouldn't be misled, either, by the fact that there are only three cars on view here. The photo was probably taken very early in the morning.
The original alignment of Lower Street, as it curves away to the left beyond the Town Hall can, as we've mentioned before, still be discerned in the bus lay-by next to the present day amphitheatre in the Bullring.
St Michael's Way was built on an alignment which runs off  through the site of the buildings to the right of Harold Woodbine's (the white building), including Foster's Bike Shop ( With the advertisement hoarding on its facing wall).

One year ago, on the 9th June 2011, we were standing at the bottom of Dierden's Terrace and looking, as it happens, in the opposite direction, from The Bullring towards the Town Bridge. 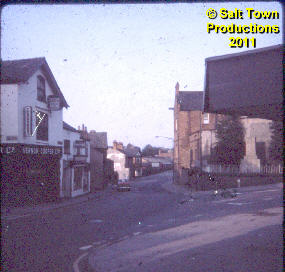 This was the final entry in our original Middlewich Diary on the Salt Town Site. Can it really only have been one year ago?