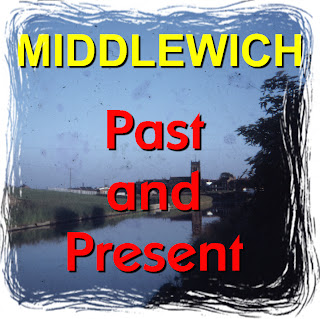 Here are the questions on 'Middlewich Past and Present' used for the first Middlewich Diary Quiz at the Boar's Head recently.

The questions are all based on the Middlewich Diary itself and the answers can be found herein.

Those of you who found Cliff's picture round a little daunting may fare better with these questions; on the night the lowest scoring team in this round gained 6 points out of 10, two teams gained 7 out of 10 and no fewer than four teams gained 9 out of 10.

If you were at the quiz, you'll realise that a couple of these questions have been slightly paraphrased.

A link to the answers can be found below

MIDDLEWICH PAST and PRESENT


1: Towards the end of April  2012 the Middlewich Diary took a last look at a Middlewich institution which had been around (under its current ownership) since the mid 19th Century. What was it?

2: On March 17th, Middlewich lost a very popular lady who could also be regarded as 'a local institution'. She worked on the canals all her life, lived for many years at Wardle Lock Cottage, and was well-known and well-respected throughout the canal community as well as the Middlewich community. Who was she?

3: In November 2011 we were taking a look at what we called 'the factory lane', where once stood the silk works of British Crepe (G H Heath), a building which had formerly housed the Anglo-Swiss (Nestle) Condensed Milk factory. Most of the area is now given over to new housing. What's the real name of that 'factory lane'?

4: In September of 2011 we were remembering a dramatic event which happened on Boxing Day 1962, a few miles away at Minshull Vernon. What was it?

5: According to a Middlewich Diary entry in March 2012, about 50 yards away from the Boar's Head Hotel on the 16th December 1931, Councillor J P Walton of the Cheshire County Council performed the opening ceremony of what structure?

6: In November last year what did we describe as:
...one of the best in the area. It was a comfortable and enjoyable place to be, and it's good to know that the building survives externally much as it has been since 1920, and that the name lives on as a slightly unusual name for a Chinese Restaurant?


7: Not  too long ago we had to say goodbye to yet another of those well-loved Middlewich institutions. Norman Macklin was well-known and well-respected around the town, as his father John had been before him.
What position of responsibility did Norman's father John hold? One of Norman's life-long interests will provide a clue, and John Macklin's place of work has been pictured in the Middlewich Diary several times at various different times in its history.
Was he:
A Council Chairman
B Bank Manager, or
C Station Master?

8: As recently as June 5th we featured a piece on the launching ceremony of Middlewich Narrowboats' new boat Oak. Who performed that ceremony?

9: On the 10th March 2012, courtesy of Carole Hughes, we featured a newspaper photo of what was probably the last 'baggin' time' at the only open pan salt works in Middlewich at that time (1966) not owned by Henry Seddon. What was the name of that works?

10: In August 2011 the Middlewich Diary featured a colour slide of a local councillor who was the last Chairman of Middlewich UDC in 1973, and also the first Mayor of Middlewich in 1974.
Was he:
A Frank Bailey
B Derek Millington
C Fred Stallard?

Email ThisBlogThis!Share to TwitterShare to FacebookShare to Pinterest
Labels: MIDDLEWICH DIARY QUIZ, MIDDLEWICH PAST and PRESENT