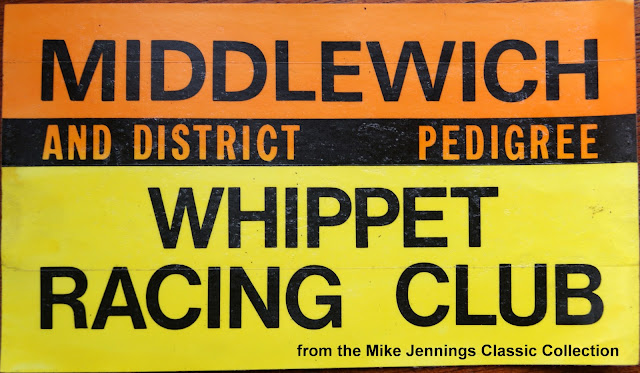 We're taking a back seat on this one, never having heard of the Middlewich & District Pedigree Whippet Racing Club, and we're more than happy to hand over to regular Middlewich Diary contributor Mike Jennings who says:

I found this car sticker in my cupboard. It is from the late 1970s.

It sounds a grand organisation to belong to and I can see in my minds eye the attire needed to belong to the club!
I wonder where the race track was?
At the back of my mind I am sure they ran on Station Field and used a bicycle placed upside down with someone winding the peddles furiously pulling a ball of rags (Hare) attached to a rope???
There must be Ex Club members still out there or maybe it still exists?

Yours not wearing a flat cap

- So does anyone remember this club? Does it still exist? It's over to you...

Geraldine Williams Mike was quite correct. It did start off at Station Field with the bike, etc. as he describes. I think it originated as part of Dennis' fund-raising (Ahem!) for a new swimming pool for Middlewich.

Andy Kendrick  We used to race on Dennis White's field for a few seasons, then moved to Sutton Lane. My Dad had five whippets; two came second in the United Kingdom Open.
Brill times - proper traps and lures racing on a straight, but winners had to be handicapped - i.e. put back a few lengths if they won the week before.
We had a pedigree whippet by the name of Blue Smoke - i.e. our Smokey classic racing dog. She was lovely, with fawn legs and a slatey blue coat, hence the name.
She was so good that crossed lurchers could not beat her.
Another point to mention: After we raced on Dennis White's and Sutton Lane we had the privilege of holding the UK Open, and this was held on RHM's sports field (no doubt because of the ready supply of beer.
The new venue was an indication of how many attendees with dogs were turning up and how the sport had grown in Middlewich at that time.
I remember people from Cumbria, West Kirby and Birmingham attending the event, among others.
It was very good.
The lure was on a spindle powered by a car battery and it moved quite fast (it had to!).
The traps were controlled by a chap called Rolly Banks, who came from Audlem. He was a real character and wore a deerstalker, even in 70 degrees heat.
Real class!
It was a big deal at the time. We reared these dogs to hunt rabbits in the 1970s and there was many a pensioner at the time grateful for an inexpensive feed. They would come to us and asking when they could have more.
Roasted and stewed one rabbit could provide three meals, and they always wanted more.
The dogs had a lot of potential, and when the racing came along their energy was put into road work.
My Dad went miles with us, following the dogs around Bradwall, Sproston and all the villages around Middlewich.
The hunt was then turned to lamping to get some pocket money. We used rifles then - the dogs were a back-up.
I must point out to anyone concerned about animal welfare that things were difficult at the time.
This was also another way of controlling the rabbit population and limiting crop damage. The farmers loved us most of the time.
This was the 1970s and things were hard sometimes.
Then along came the whippet racing and our dogs had a chance to shine.
And that's the story of how whippet racing started in Middlewich.
My Dad must have pictures somewhere. If I manage to find them, I'll post them.
I'm glad someone remembered the whippet racing, as it was a great Sunday afternoon out.

- Many thanks to Andy for this fascinating insight in what seems to have been quite a major sport in Middlewich - Ed.

...and here are some more memories, this time from...

Wendy Sproston I'm sure my Mum and Dad went to the RHM club once for the whippet racing.
We used to race whippets from when I was about three years old until I was in my late teens.
We went all over the country, but mainly the Midlands.
I used to love being the 'lure girl' - taking it back up to the traps at the end of each race for pocket money.
It kept you fit, I can tell you!
My dog was a racing champion. Her race name was Amazing Flight but at home we called her Stella.
We had so many dogs as I was growing up and, although they were racers, they were always my pets too.
Stella always went to bed with me.
It was such a great sport to be involved with, and the dogs loved it.
They always knew where we were, and would get excited as we drove into whichever racing venue we were going to.

On June 2nd 2011 the Salt Town Site's 'Middlewich Diary' pages were featuring the enigmatic 'SNJ' sign which many a frustrated motorist, stuck in one of the endless Holmes Chapel Road traffic jams, may have seen while gridlocked on the 'station bridge'.

How many of those motorists realise that 'SNJ', and the railway it's associated with, could be part of the solution to those endless hold-ups?

WHERE AND WHAT IS 'SNJ'?