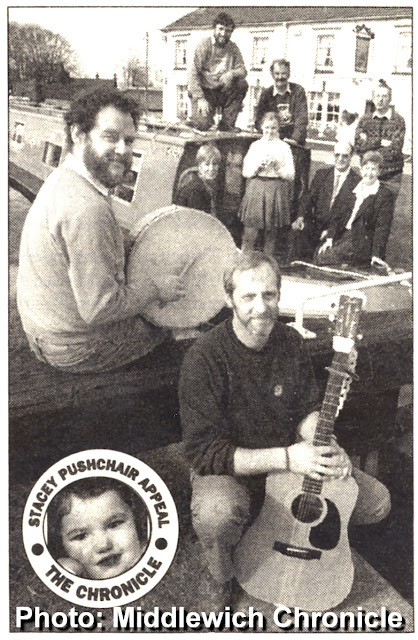 by Dave Roberts
Today is the birthday of our erstwhile colleague Mike Appleton, now living overseas, and we thought it would be nice to dig out this newspaper photograph from our archives (actually the Folk & Boat Festival Archives) as it shows not only Mike but also other members of the then Folk & Boat Festival Committee (or 'team' as we liked to call ourselves in those days) including, very unusually, me (that's me front left, pretending to know one end of a bodhran from another).
The occasion was a photocall for the Middlewich Chronicle's 'Stacey Pushchair Appeal' and the pub in the background is the King's Lock.
The F&B Committee were planning a special concert for the appeal which was raising money to help purchase a new state-of-the-art pushchair to make life easier for 19 month old toddler Stacey Preston and her parents who lived in Whitley Close.
Quite why the photographer should have chosen Mike and me to head the photograph, leaving lesser team members seething in the background is not clear (although Mike really did play the guitar and, presumably, still does).
For myself, whenever I look  in the mirror these days and note with alarm the  thinning hair and expanding waistline, I can console myself with the thought that at least I don't look like I did then.
Mike, of course, hasn't changed one iota.
Happy Birthday Mike!
Posted by SALT TOWN PRODUCTIONS at Monday, May 28, 2012