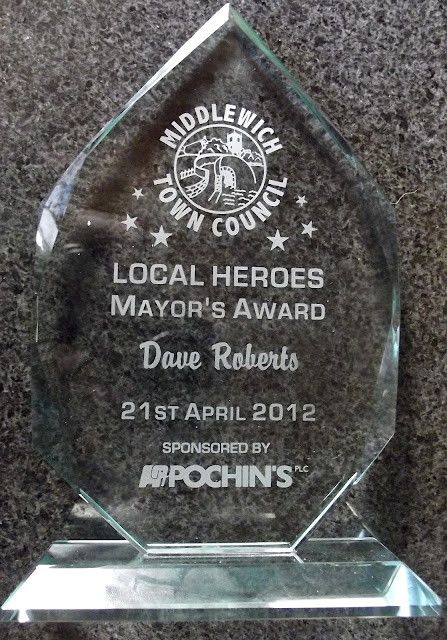 Here's the Mayor's Award for 2012 awarded  and presented to me on the 21st May at Middlewich Civic Hall by the retiring Mayor, Cllr Sonya Edwards, at the town's annual Mayor making evening.
I've decided to feature it here, not for egotistical reasons (anyone who knows me will, I'm sure, realise that), but because I think that the awarding of this trophy is a very welcome official endorsement of the value of The Middlewich Diary (the name, incidentally, will change subtly from 'A Middlewich Diary' to 'The Middlewich Diary' tomorrow, simply because that's what everyone calls it).
I think the Middlewich Diary appeals to everyone with an interest in the town, be they long standing residents, new residents, exiled Middlewichians, or those who just find the history of this town fascinating.
I'd like to thank everyone once more for supporting our Middlewich Diary over the last year, and especially those who have contributed their own photographs and memories.
Rest assured that if your own particular contribution has not appeared yet it will appear here in due course.
The nomination for this award also mentioned my involvement in  the Middlewich Rail Link Campaign, and I'd like to thank everyone concerned with that organisation which is working hard, with the active and very welcome help of our MP Fiona Bruce, to bring about the re-opening of our local branch line to passenger trains, along with the building of a new Middlewich Station.
This development is vital for the regeneration of our town, and its importance can't be exaggerated.
I do know who nominated me for this award, but I think she would prefer to remain anonymous.
I'd like, though, to say one final 'thank you' to her, nonetheless.
Dave Roberts