Here's an idyllic and almost rural scene on the outskirts of Middlewich which is still very recognisable today. We think, from the look of the motor car and the clothes worn by the two girls in the foreground, that this view of Nantwich Road as it dips steeply to run under the Middlewich Branch canal via 'The Aqueduct' (actually, as we've seen, one of three such structures in the town, one of them only a few yards away)that this picture dates back to the early 1920s
The car in the photo is coasting serenely down the slope, confident that the likelihood of much traffic coming the other way is remote, while the two little girls pass the time away chatting happily to each other as they linger halfway down the brick staircase which runs from road level up the bank to join the canal towpath.
Quite why that staircase is there is a little uncertain.
It's built from heavy-duty  blue engineering brick and  appears to have been put there at the same time as the aqueduct, so it's possible it's there to give maintenance workers access to the canal and the top of the aqueduct.
From time to time concerned people send reports into British Waterways about the fact that the aqueduct has 'started to leak'.
The truth is that, like most such canal structures, it always did leak, and quite possibly always will do.
The houses at the top of the picture would have been quite new at the time the photograph was taken.

On the 26th May 2011 the Middlewich Diary section of the Salt Town Site was taking the first of many looks at Kinderton Street, and in particular the Talbot Hotel. 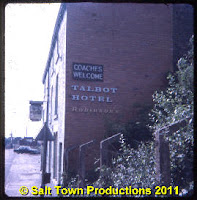