HARRY JACKSON AT A WHISTON'S FUNCTION 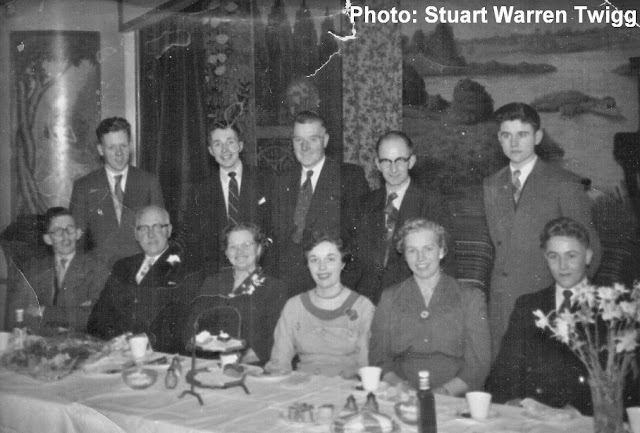 by Dave Roberts
We're grateful to Stuart Warren Twigg who sent us this photograph of an unspecified celebration from many years ago (such events were always called 'functions' in those days, and the name survives to the present day in one or two local pubs who still advertise the presence of a 'function room' on the premises).
The photograph features Stuart's grandfather, Harry Jackson (seated, left), who we last saw here, and was taken some time in the 1950s (Stuart thinks it may be later - see Facebook Feedback, below - and he may well be right. There's something a bit 60s-ish about the way the men are dressed) at what we think was a 'works do' for employees of Whiston's Garage and Radio & TV shop, situated where Nantwich Road, Chester Road and Wheelock Street all meet.
In his covering 'note' Stuart also mentions Albert Atkinson who, I think, worked in Whiston's Radio & TV dept.
Certainly he later ran his own electrical repair business in a small shop adjacent to Douglas Williams & Co (where Harry Jackson was in charge) at the top end of Wheelock Street.
Albert was also a town councillor during the same period.
I think that's Albert standing up on the right of the picture
So Stuart and I are wondering if Middlewich Diary readers can put names to the other faces.
As always on the Middlewich Diary, we're also open to corrections and amendments.

Stuart Warren Twigg  Hi Dave. A very young Albert is indeed top right, and Mr Sid Whiston is sat next to Harry. I think that the 'function' is at the old ICI club and is possibly circa 1965, which ties in with Grandad's 25 years service at Whiston's, but that, sadly, is where my knowledge ends, though my sister thinks that a Jean Royle may be the lady front and centre?

Editor's note: The ICI Club which served the ICI Works in Brooks Lane, and continued after the works closed in 1962 before becoming Pochin's Club in the early 1970s, is now home to Middlewich Community Church

Geraldine Williams That's Mrs Whiston seated next to Sid and the man in the centre of the back row is Jack Bowers who was the foreman mechanic at Whiston's. Jean Royle certainly worked at Whiston's, but I wouldn't have recognised her in this photograph. I wonder what they were celebrating? Only Sid and his wife are wearing buttonholes......

Bill Eaton The person stood behind Harry Jackson is, I'm sure, Les Bowers, who went on to open his own garage in Lach Dennis

Posted by SALT TOWN PRODUCTIONS at Thursday, May 03, 2012