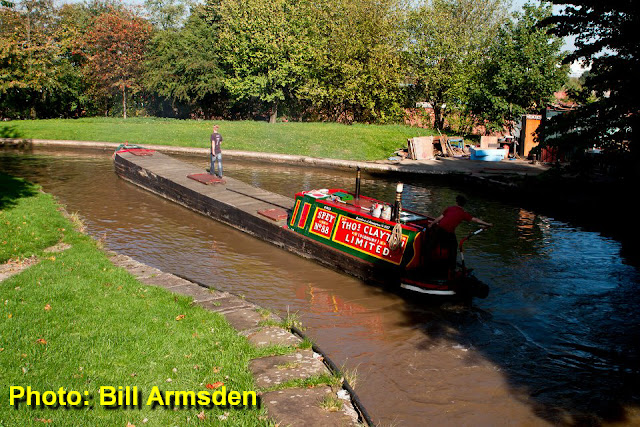 A constant source of interest and enjoyment for both Middlewichians and visitors alike is the canal network which threads its way through the town.
In among the endless procession of pleasure boats, thousands of which pass through the town every year, are  historic boats, some of which have been visiting Middlewich for many many years both in working days and in the preservation era.
Here's one of this historic fleet, pictured by Bill Armsden as she makes her way round that curious 'dog leg' between the top and middle Brooks Lane locks where the Trent & Mersey makes an abrupt left turn to make its way towards the Town Bridge on its way to Northwich.
Strangely there is not as much infomation on the NB Spey on the internet as you might think (there's a link below to one of the more informative sites) but we do know that she was built in 1937 when the company had begun to specialise in the carriage of liquid cargoes such as oil and tar.
This, of course, explains the boat's flat deck.
It was a sister boat of the Spey, the NB Tay, which was used to take Maureen Shaw on her final ,journey from Wardle Lock to the Town Wharf earlier this year.