THE TV DOCTOR WILL SEE YOU NOW 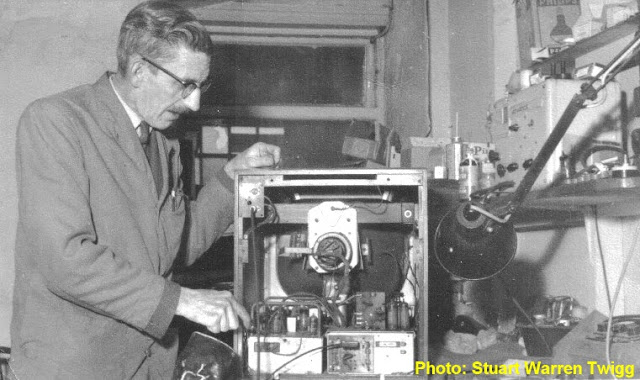 by Dave Roberts
It's That Man Again! Another addition to our growing collection of Harry Jackson pictures courtesy of Stuart Warren Twigg, showing Harry working away at what is now almost a forgotten trade - TV repair.
From the look of the set Harry is ministering to, this picture will have been taken in the late 50s/early 60s when a visit from the TV repair man was almost like a visit from the family doctor.
There were the same anxious looks from family members as the 'symptoms' were discussed; was there trouble with the vertical or horizontal hold? Was it a simple matter of a valve needing replacement? Was the co-axial cable getting a little frayed? Did the transformer need rewinding?
Or - horror of horrors - had the tube itself 'gone'?
If your tube had 'gone' then you faced the prospect of the set being taken away to the TV equivalent of hospital and being attended to by specialists such as Harry, who is seen here at, presumably, Whiston's radio repair shop in Wheelock Street assessing the chances of someone's prized set being coaxed back to life.
Because of the unpredictability of valve TVs and their being so prone to breakdown, many people rented sets from Whiston's, Harold Woodbine's, Vernon Cooper's or, somewhat later, Douglas Williams & Co.
This meant that, if your set had to be taken away to be repaired, you did at least have the dubious pleasure of watching a set lent to you by your local TV rental shop.
In theory, at least, this meant uninterrupted viewing pleasure.
In practice, however, it was a bit of a mixed blessing. Loan sets were invariably badly maintained and usually had slightly blurred pictures showing people with highly elongated features like coneheads or squashed up faces like munchkins.
You were lucky if you could locate the vertical hold control in order to stop the picture rolling up and down and inducing a weird kind of motion sickness.
In fact in those days to have a 'good picture' on your set was a cause of great pride and owners would turn on their sets for visitors to show them what a good few hours of twiddling the brightness and contrast controls could achieve.

If you had made the bold move of buying your set outright - always a very expensive business  - any breakdown involving the set being taken away led to long nights staring glumly at the corner where the TV usually resided and listening to the Light Programme or the Home Service on the wireless.
Until 1956 Middlewich could only receive one channel - BBC Television, from Holme Moss in Yorkshire. When ITV came along, in the form of  Granada TV - uncompromisingly 'from the North' - and the much brasher, showbizzy ABC 'Your Weekend Television In The North', viewers were faced with the choice of either getting a new set or buying an 'ITV Converter', a primitive early form of set-top box which could pick up  programmes from the BBC's  new competitor with the added attraction of squiggly lines all over the picture because of co-channel interference.

Anyone who has ever used the tuner on one of those early 'dual channel' sets will remember the experience vividly.
A circular knob, rather like a miniature water-wheel and with segments numbered from 1 to 13 was turned, causing much flashing on the screen and clicking and crunching on sound, between BBC TV on Channel 2 and Granada/ABC on Channel 9 which came  from Winter Hill near Bolton. In fact ITV and BBC digital channels, along with a bewildering array of other offerings, still come from there.

It was all light years away from today's flat screen, multi-channel world, but TV then had an excitement about it which has all but vanished through over-familiarity and the sheer abundance of television everywhere you go these days.
For many people television has been around for over 60 years and, though it's tempting to laugh at those early days, it's such a personal medium that more often we end up shedding a few nostalgic tears instead.

David Roberts Such was the prestige of the job in the 60s and 70s that TV techs were entitled to fuel their vehicles when there was a fuel shortage. Today it's hard going with very little manufacturer support and virtually no service manuals or fault data.

(Note: No, 'David Roberts' is not me. the name's just a coincidence).
Posted by SALT TOWN PRODUCTIONS at Sunday, September 08, 2013