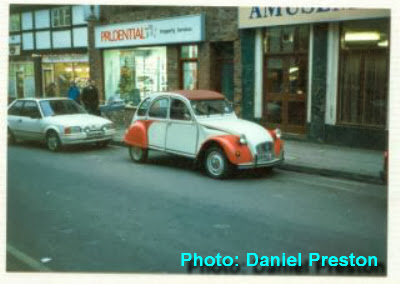 by Dave Roberts
This photo, taken in 1989 by Daniel Preston, is a good example of a picture which captures a moment in time and illustrates how small changes can 'creep up' on us almost without our noticing.
It's one of those photos where everything  looks familiar and yet, somehow, not quite the same.
Daniel took the picture because he was interested in that unusual red and white car (described by him as a 'pram car') and in the process captured, in the background, a little piece of Wheelock Street which has altered over the years, but not beyond recognition.
On the left is Cynthia's Patisserie, at that time simply that. A cake and pie shop.Always very popular and serving high quality food to passing customers
In 2013 Cynthia's is still going strong and many of those customers now linger awhile and take advantage of the tables and chairs on the pavement outside, allowing them to have a snack and a coffee and pass the time of day.
Next door is  Prudential Property Services, now a branch of Reeds Rains and fulfilling the same function in 2013.
This shop has a long history, dating back at least to Victorian times and can be seen in this classic Middlewich scene with ornate gas lamps attached to its walls.
And then comes the Alhambra, dating back to 1920.
Originally a cinema (universally acknowledged to be one of the best in Mid-Cheshire throughout its 40-odd years of service to the town) and now a Chinese Restaurant with a Spanish name.
The ornate art-deco frontage has survived intact throughout the changes the building has seen over the years.
At the time of the photograph the front section of The Alhambra was, controversially, the home to an amusement arcade (the building also catered for bingo and snooker players) and, long before the term 'anti-social behaviour' was invented, people were expressing alarm at the 'great harm' this was doing to the young people of the town, who were liable to run amok because of the licentiousness and decadence brought about by habitual playing of Pinball and Space Invaders.
One councillor felt constrained to point out that Wheelock Street was 'not Blackpool Prom'.
Which, of course, it isn't.
Apparently, playing on slot machines and video games automatically turns any young person into a hardened criminal overnight, meaning that we all run the risk of being murdered in our beds.
Somehow the town survived this threat to our safety and well-being and now the slot machines and video games have been replaced by the entrance to the Alhambra Chinese Restaurant, memorably captured in this night scene by Bill Armsden.
Why don't you take a look through your own photo albums and see if you have. perhaps unintentionally, captured a similar background scene showing Middlewich as it used to be?