Today we're trying to fathom the vexed question of Lawrence Gardens and Lawrence Avenue. As we've seen here, Lawrence Avenue in the present day is in two halves,split in half by St Michael's Way (or the Middlewich Inner Relief Road, to give it its original, more prosaic title) and is always referred to officially as 'Lawrence Avenue' East and West. Some of the older inhabitants of Middlewich, however, still refer to this former thoroughfare, which at one time formed a handy alternative route between Wheelock Street and Webb's Lane, as 'Lawrence Gardens',  the two names  being used  interchangeably.
For some time now we've been trying to find out just when 'Lawrence Gardens' became 'Lawrence Avenue'.
It's one of those things which happen slowly and gradually in small towns, when an area changes, almost with anyone noticing, over the years.
But when was it decided that 'The Gardens' should become 'The Avenue'?
Who decided it?
Obviously the Middlewich UDC must have had a hand in it (although the situation is complicated by the fact that the road is unadopted) because the signs indicating the name of the Avenue seem to be of pre-1974 vintage.
The fact is, that nobody seems to know.
Even an appeal to the ultimate authority, Allan Earl, was inconclusive so here we'll take a look at the evidence provided by old photographs and maps.
We won't find out when the name was changed, but we can at least take a look at how Lawrence Avenue has altered during  a period of more than a hundred years.
Over half a century separates the photographs above and below.
The top photograph depicts an almost semi-rural scene in  the Edwardian era.
Everyone's happy and eager to pose for the camera, with even the family's pet dog getting a look in.
In the background more people have turned out to see what the photographer is up to and to get themselves immortalised on film in a record of a moment in time which we are privileged to be able to recall all these years later.
On the extreme left is the rear of the current Brooks and Bostock premises, which fronts onto Wheelock Street. A very much altered building which in former days had bay windows at the front, in common with a lot of the houses in the area.
Next in the row is the converted house which is now home to David Reeves & Co's dental surgery and the other houses of the same period which still flourish today and add a bit of charm to this end of town which has suffered a decline in recent years.
Behind the children in the right background are a profusion of trees which must be part of the gardens which gave the road its original name. It's impossible to tell from this picture, of course, what buildings lay on the other side of the road.

Fifty or sixty or so years later all the semi-rural charm has disappeared and Lawrence Avenue is a very nondescript looking area indeed. At this time it could hardly justify the name 'Avenue' as there wasn't a tree in sight.
In this shot we're slightly further down the road and we can see housing dating from a later period on either side. The semi-detached house just above the Morris Minor, the large house opposite, and the white-washed house in the background were not long for this world as, in the early 70s, the Middlewich Inner Relief Road, or St Michael's Way, came along, slicing right through the middle of the road and creating the current Lawrence Avenue East and West. In this small section of the Ordnance Survey map of Middlewich dated 1907-8 and updated to 1938, the road is clearly and uncompromisingly marked 'Lawrence Gardens' but there is no sign of the trees shown in our top photo - the road cuts straight through from Wheelock Street to Webbs Lane.
To the left, though, is a large area of what seem to be orchards (in the present day occupied mostly by sheltered housing) which are probably the last remnants of what used to be Lawrence Gardens.
For reference, here's that section of map again with today's St Michael's Way added (rather clumsily) in blue. 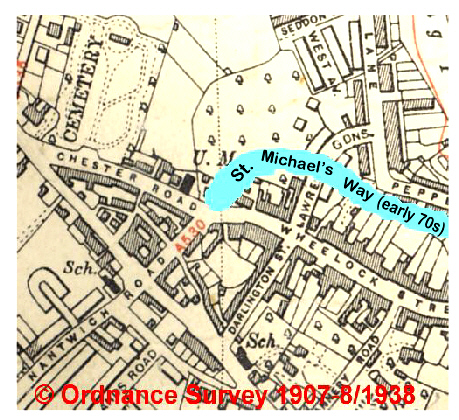 So the closest we can get to the answer to our question - when did Lawrence Gardens become Lawrence Avenue? is:
Sometime between 1938 and 1974.
As always we welcome comments and additional information.

Geraldine Williams I suppose, by rights it should have been called 'Lawrences's Gardens as the house there was the home of C F Lawrence and the orchard was always know locally as 'Lawrence's Orchard'. And shouldn't an avenue, by definition, be lined with trees? just sayin'!

Dave Roberts I'd always assumed that Lawrence Gardens/Avenue was named after CFL himself, but the area (and the name) obviously pre-dates him and is named for his family. I wonder why the name 'Lawrence Gardens' wasn't officially retained?

Geraldine Williams I think you're probably right about it being a family name. I don't know CFL's dates*, but a relative of ours was prosecuted as a lad for scrumping apples from Lawrence's Orchard - and he was born in 1905! Incidentally, my husband's grandparents lived in teh house shown in the first photograph with the group with the pram outside...
I have childhood memories of Kitty Lawrence, who i think was CFL's widow, but must have been much younger than him when they married. I'm not sure whether or not she was a writer. Their house was accessed from a pathway down by that white bungalow on the left, but I don't know if it is still standing.