We're grateful to local photographer Jim Moores for this 'photo of a photo' showing the Junction Inn which, until 1909, stood at the end of Brooks Lane close to the junction of the Trent & Mersey  and the Wardle and Shropshire Union (Middlewich Branch) Canals, giving the pub its name.
This pub stood on the right hand side of Brooks Lane immediately adjacent to the canal bridge which, of course, still survives to this day. The building's site is today occupied by a modern house complete with  pleasure-boat mooring where once the wall of the pub rose up from the canal bank. Behind the buildings seen here stood Brunner-Mond's Alkali Works, the site of which is largely occupied now by Pochin Ltd.
It's not clear from this picture whether The Junction was another one of those 'stack pubs' so common in the town, with rooms at street level for patrons from the town and another at canal level to cater for the needs of the 'boatees', although a pub in such a position must have drawn a lot of canal trade.
Two of these interesting 'stack pubs' still exist in the town - the Big Lock and the King's Lock (although the configuration of the King's Lock is somewhat different, as the upper storey is at canal level, and the ground falls away behind the pub to give access to the lower storey where stabling for canal horses was once provided).
Another 'stack pub', 'The Navigation', once stood near to the Town bridge, on the corner of Mill Lane and Kinderton Street. An earlier Middlewich Diary entry features a photograph of 'The Navigation' taken at around the same time as this one and bears a striking similarity to it, although 'The Navigation', certainly in its rebuilt form, is on a somewhat larger scale. Take a look here.
When we say that The Junction Inn stood on this site until 1909, we're quoting local historian Allan Earl who, in Middlewich 1900-1950 (Countrywide Publications 1994) tells us that both this pub and 'The Carbineer' on Hightown (seen here) were closed because of the prohibitive costs of modernising them. Added to which, the local licensing magistrate was voicing the age-old opinion that there were 'too many pubs' in competition with them. In all probability although the pub was closed the building would have lived on, possibly as a private house, for quite a few more years.
On the left hand side of the bridge parapet can be seen a sign warning people that the bridge, which was built in the days of horse-drawn traffic, could not stand any amount of weight.
Until quite recently (the 1960s) there was another sign on the opposite side of the bridge which had the same wording but was rather more spectacular in style. It was diamond-shaped and stood sentinel over the bridge
to warn people that the bridge was not designed to carry traffic weighing more than ' the normal traffic  of the district' or words to that effect, and, in an odd way, was a reminder that Middlewich was one of the far-flung outposts of a railway empire whose territory lay a quite a distance South of us.
This large cast-iron sign, headed 'North Staffordshire Railway & Canal Company' could possibly have dated back as far as 1847, which was the year that the Trent & Mersey was taken over by the railway which connected (and still connects) the Potteries with Cheshire via North Staffs junction at Crewe. At one time the sign was painted in the familiar blue and yellow colours of British Waterways. 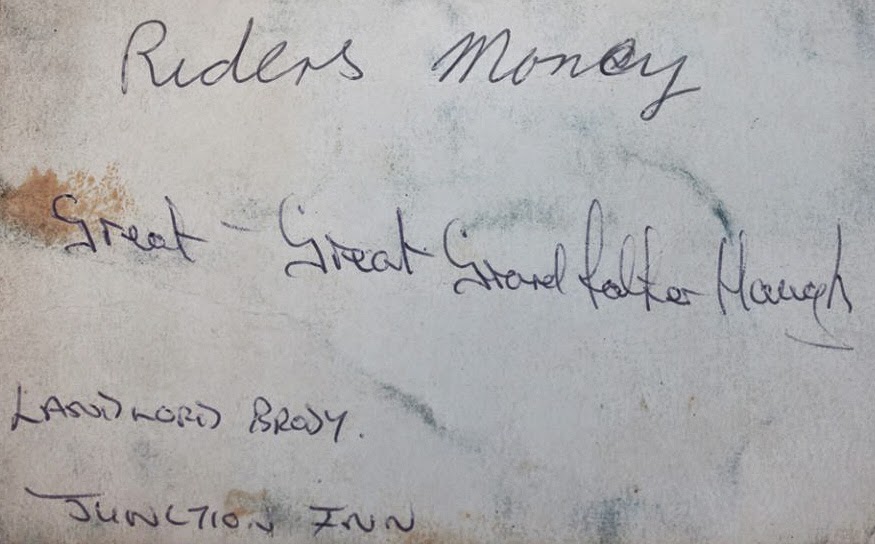 Jim also went to the trouble of photographing the reverse of this historic photo, giving us the additional information that the two people at the front of the pub are 'Great Great Grandfather Hough' and 'Landlord Brody'.
We rather fancy that Landlord Brody is the one on the right.
And what of the enigmatic inscription 'Riders Money?'
Well, long-time contributor Cliff Astles comes to the rescue on this one.
'Riders', he says, 'was a house-to-house clothing company which local people used to use when they were unable to get out of Middlewich to do that 'special' bit of shopping. People paid for the items weekly.'

So obviously at some dim and distant point in time, someone wanted to remind themselves, or someone else, to put the money by to pay Riders and, as people will, used the first thing that came to hand. In this case an old photo of the Junction Inn.

Many thanks to Jim Moores, Gwen Hughes and Cliff Astles for the photos and information.