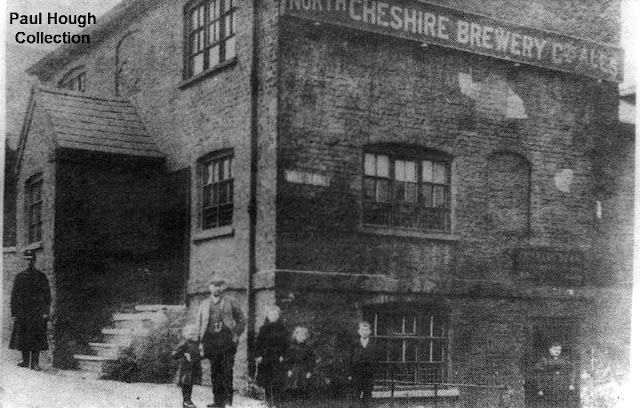 by Dave Roberts
The publication of this well known Middlewich picture arises from this diary entry in which we were debating  the location in Kinderton Street of that old thatched building which we originally identified as being where the Seabank Car Park stands today.
An alternative interpretation was put forward by Glen Leigh which would have made the building on the extreme left of that picture the Navigation Inn, seen here in or around 1894.
To my delight my old school mate Andrew Craig got in touch to say that his family has a copy of the above photograph and it shows members of his family from that period.

Andrew writes:
My Great Grandparents Charles and Hannah Dean ran the Navigation Inn from 1890 to 1896. Great Auntie Nancy (born 1892) is holding Charles' hand, Hannah is in the doorway at bottom right. The other children could be Grandfather Percy (born 1888) or Great Uncle Fred (born 1886) and Great Auntie Lizzie (born 1885). I can't find any other identities.

We're able to say for certain that  this photograph  was  taken in or around 1894 because that was the year that Charles Frederick Lawrence's celebrated History of Middlewich was published.
The advertisement below was taken from that book

The Navigation, like the still extant Big Lock and Kings Lock pubs was a 'stack pub' - i.e. it was built on two levels, with the lower storey on the canal and the upper one opening out onto Kinderton Street/Mill Lane.
Like the Big Lock the Navigation provided groceries and provisions to the people working the boats and it is an indication of the isolated lives, away from normal society, that the boat people led that it was worthwhile providing a service here, so close to the town centre.
The fact that this facility and the one at the Big Lock, just a matter of yards away, could both thrive shows how busy the canals were at that time with commercial traffic.
The advertisement also informs an eager public that the premises had recently been 'considerably enlarged' and our second photograph (below) enables us to see how the pub looked before and after that enlargement.

My sister Eileen, who sadly passed away recently, had been following a genealogy course with the U3A and, in one of the last conversations we had, was excitedly telling me that she had discovered that our Grandmother, Harriet Lannon's father (William Bull Whittaker) had been the licensee of the Navigation. Now there seems to be proof that the Deans were there from 1890-96. However, our Grandmother, who,lived in Seddon Street at the time of her wedding, was married in 1912 so, counting back, she could well have grown up at the Navigation at some point. I do so hope that Eileen was correct. 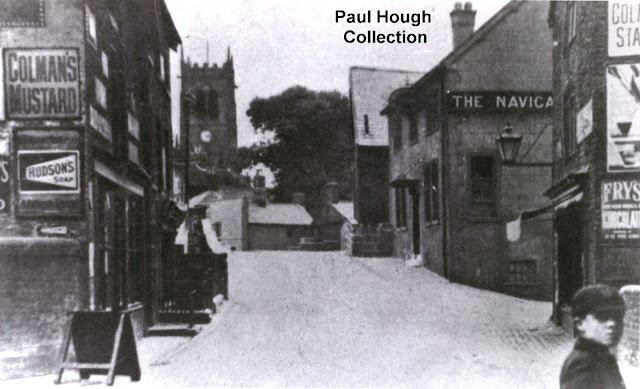 This photograph, then, must have been taken some time before 1894 and shows the Navigation in unrebuilt form with Mill Lane (which in the present day leads down to Town Bridge Motors) running off to the right between the pub and the shop with the interesting old lamp on it, where now stands that bungalow adorned with solar panels..
St Michael's Church also helps give us our present-day bearings.
Kinderton Street at that time passed over the Town Bridge (just beyond the Navigation) and then made a right turn before resuming its course and becoming Lower Street (now incorporated into St Michael's Way), running alongside the churchyard.
This unexpected dog-leg was the renowned 'Awkward Turn To The Lompon' which puzzled us for so long.
Just over the bridge we can glimpse that shop with the parapet frontage we've seen before..
The buildings on the left are on what is now the Seabank carpark and disappeared, along with everything else in this picture (except the Church, of course), in 1931 when the old Town Bridge was demolished to make way for the present structure.
Incidentally, this picture is featured on page 95 of Images of England - Middlewich (Tempus Publishing 2007) by J Brian Curzon and Paul Hurley but is labelled (by Brian ) 'Mill Lane looking towards Town Bridge from the direction of Sandbach' 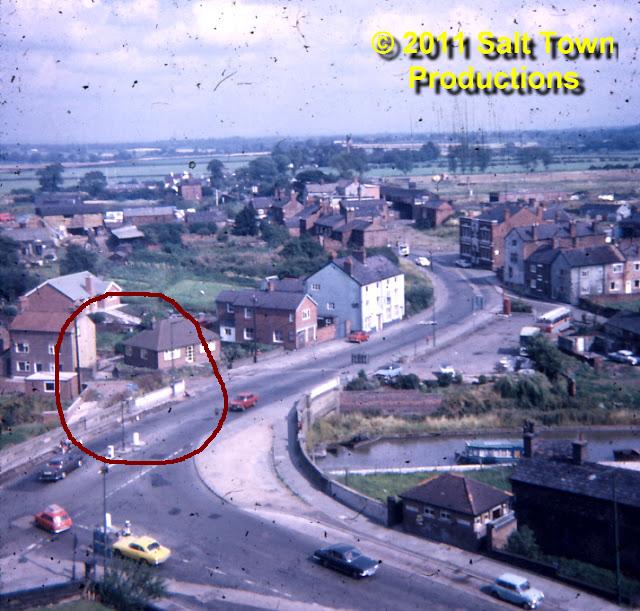 Finally, here's our standard reference Town Bridge/Kinderton Street picture which, though taken a long time ago, before one half of Kinderton Street was demolished, can still be used to indicate the sites of long-lost buildings. The place where the Navigation stood all those years ago is circled (rather inelegantly) in red..
It will be appreciated that it is difficult to be sure about the precise location as road alignments were considerably altered when the new Town Bridge replaced the old.
For a description of this picture see this posting.

Many thanks to Andrew Craig and Geraldine Williams for their help in compiling this entry
Posted by SALT TOWN PRODUCTIONS at Tuesday, April 09, 2013