Here's another Middlewich postcard which is new to us and supplied by Mike Jennings. As you can see, it's captioned 'Stanthorne Mill Pool', but appears to show a section of the River Wheelock with, on the right hand side, what might be a mill race - i.e. a stream of water taken from the river and carried off in a narrow channel to power a watermill. - in this case Stanthorne Mill.
The presence of Stanthorne Mill might also explain the existence of the weir immediately adjacent to the bridge which carries the footpath from Nantwich Road to Stanthorne. Was that there, partly at least, to increase the flow of the River Wheelock towards the Mill? The fact that the mill no longer functions as such could explain why the weir itself has been allowed to go to rack and ruin over a long period of time. 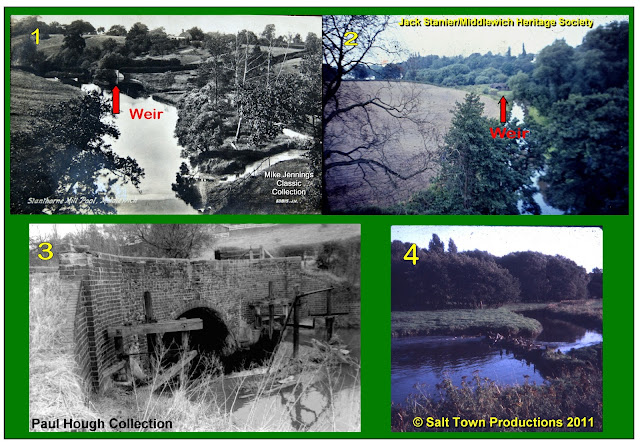 Or is this a more credible explanation of Mike's postcard?
Is Mike's picture (photo 1) an earlier version of the scene shown in Jack Stanier's slide from the 1970s (photo 2)? The weir is indicated by a red arrow in each picture. Is that Mill Lane snaking down from top right to top centre, before the houses, such as 'Three Willows', between Nantwich Road and the river were built? Certainly the bridge over the weir is quite distinctive and its curved abutments (as seen in photo 3) might be discernible in both photos. This would mean that 'Stanthorne Mill Pool' was not actually at Stanthorne at all and that the weir, as we've suggested, was there to ensure a good and strong flow of water to the mill, several hundred yards away.
It is, of course, very difficult to make out the actual course of the River Wheelock in any photos taken since the first world war because of the profusion of trees along its banks.
Photo number 4 dates back to the 1960s when the area was not quite so overgrown and shows the 'mill pool' looking from the weir towards the Shropshire Union Canal Middlewich Branch which runs on its embankment behind the trees at the top of the picture.
(originally published 10th April 2013, revised 15th April 2013)

UPDATE (16th April):
Edward O'Hare writes:
Hi Dave, my Mum and Dad have just confirmed your alternative theory as they both remember the small stream by the side of the river.
Also, the tree that is seen on the right hand river bank eventually grew right over the river, so that you could cross over from one side to the other without getting wet - most of the time!
(Edward is the son of Mike and Rita O'Hare, who live in Nantwich Road, close to the area shown in these photos. Many thanks to him and to Mike and Rita for confirming this for us - Ed)