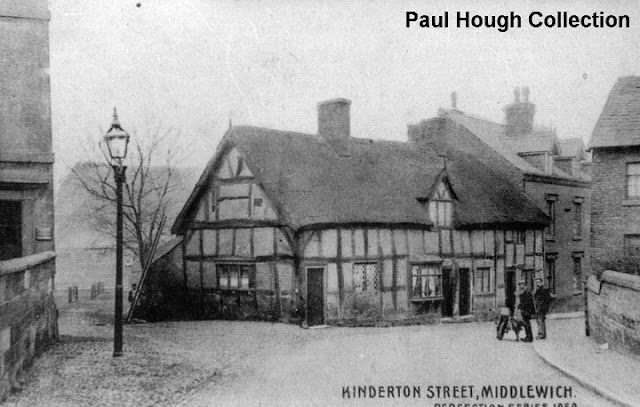 
by Dave Roberts
This is another of those classic  postcards which Middlewich people old and new will recognise instantly from books full of photographs of 'Old Middlewich' or framed copies on pub walls.
And as soon as we look at it we have a vague feeling that we know the exact area it represents (admittedly the 'Kinderton Street, Middlewich' caption is a major clue).
That picturesque half-timbered group of cottages has to be where the Seabank car park is in the present day, with Seabank itself running off on the left down to the River Croco and the canal, just as it does today.
That would make the building on the extreme left the present-day Kinderton Hotel.
But what is the building on the extreme right? It's certainly not the Talbot Hotel which would be further down the hill on the other side of it.
And that piece of wall is very reminiscent of the one that ran along King Street past Moreton's farm and around the corner into the top end of Kinderton Street, which probably indicates nothing more than the fact that the two walls were built by the same local builder in his own distinctive style.
As late as 1948 there were buildings all the way down this side of Kinderton Street to the Town Bridge, as seen in this rather blurry enlargement from one of the pictures in the Phillip Shales collection 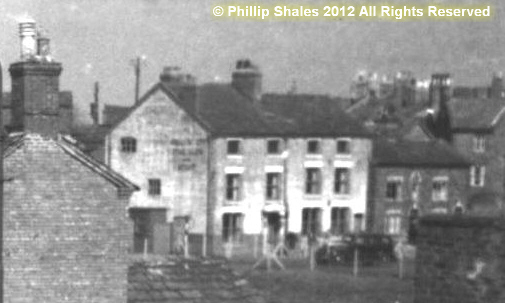 I can never remember there being any buildings between Costello's shop and the Talbot, from the late fifties until demolition of every building on that side of the street from the Talbot to Moreton's farmhouse in the mid-seventies (except for Flag Alley which was behind the right hand side of the Talbot and at right angles to it) so the buildings we can glimpse here must have disappeared sometime in the early 1950s.
Is that large one on the extreme right the same building shown on the right of our main picture?
Note that even in 1948 the other side of the street appears to have been cleared and become a car park, so our picturesque thatched cottages and the building(s) next to them were long gone by then.
Returning to the main picture, we can also note, to the right, the usual  bystanders looking at the photographer in the  usual suspicious way. I'm not sure what the contrivance standing next to them is. Could it be a motorbike?
And on the left is another example for Geraldine Williams' collection of interesting Middlewich street lamps.
If you look carefully to the right of it, there's someone lurking underneath that tree with a ladder.


Geraldine Williams I can remember the buildings rext to The Talbot and thought that they existed until the early 60s. One of the families was called Bland, and there was also  a Mrs Something (hyphen) Bailey.
Flag Alley was also in existence then and I always assumed that the land between them and Costello's shop formed their gardens (there was some cultivation), But when you think about it, the clue's in the name 'Alley' and presumably the land was the site of  the big building which had been demolished.

Dave Roberts It's difficult to remember now, but we moved to King Street in (I think) 1959. Our route in and out of town was always Kinderton Street, and I don't remember those buildings ever being there. I may be wrong, of course. What we really need is some clear pictures of that side of the street before demolition, but the only ones I've ever seen show The Talbot and the row which began with Costello's shop with a huge gap in between the two, which is how I remember it.

This has been received from Bill Eaton:

The building on the right is the gable end of the three cottages that joined onto The Talbot public house. At the end of the wall near to that building were steps leading to two more cottages that faced towards Costello's shop with gardens at the front.
(This will be what I remember as 'Flag Alley'. I delivered rate demands there when i worked for the Middlewich UDC - Ed.)
Wilkinson's lived in the first one and, at the top of their garden were two more cottages which faced onto Kinderton Street.
Bill Hewitt, a local coal merchant, lived in one. He had access to the rear of the buildings and he kept his cart and stabled his horse there (the building behind Costello's shop?). The entrance to the other ran to the rear past Costello's outside loo. (see this entry, and associated links - Ed) I hope this helps in some way.


We've tried to reply to  Bill's e mail, but unfortunately our email provider won't allow us to for some obscure reason. If you're reading this, Bill, many thanks -Ed.

This has thrown up a lot of questions in my mind.
That certainly looks like a motorbike, which could put the picture just before the turn of the century (see  'An Awkward turn to the Lompon' for a picture of  another motorbike not too far away - Ed).
There only seems to be a twopenny-ha'penny bridge on Seabank, which could only have crossed the Croco.
Wouldn't there have been a means of crossing the canal there?
I wonder when the thatched cottage disappeared? I can understand that going to the wall, but the building next to it seems to have been quite substantial. Would it have survived until the rebuilding of the Town Bridge?
And wasn't Moreton's Farm in an unusual place - i.e. tacked onto a row of houses with virtually no land? I know Bert Moreton used the land behind the houses in King Street, but even so...
Perhaps the mill pool was formed later than the farm?

Hi Dave, I was reading the comments about the location of this image and a member of my family born in Middlewich 1940's is 99% sure that the large building on the right is the early Talbot before extension. So the left turn could have been a route to the old gas works where Town bridge motors area is today.

Thanks Glen. An interesting theory. This would make the building on the extreme left the Navigation Inn, immediately next to the old town bridge.
I wonder what other people think? We welcome further comments - Ed.