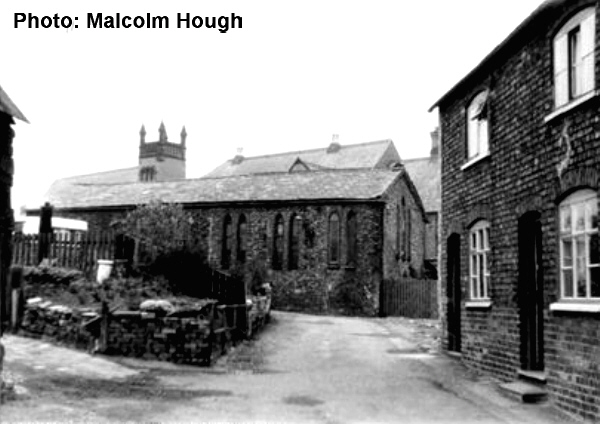 This photograph of Wych House Lane in  Middlewich shows, on the right hand side, the cottages (nos  9 to 11) which were built some 300 years ago on the top of the bank of the River Croco. This was before the Trent & Mersey Canal was cut in 1777.  In 1979 these cottages were converted into one house (the 'House of Feathers' -Ed)  .
The building in the centre of the picture is Middlewich's original Catholic Church.
Ken Sumner, who supplied me with the photograph and some of the information, told me that his Great Grandmother Elizabeth Dunning was born in what is now number 11 in in 1850. Elizabeth is shown as a one year old in the 1851 census.
The gap between the houses and the chapel is where numbers 1, 3, 5 and 7 stood.
In 1851 the houses in Wych House Lane do not appear to have had numbers, so this gave me a fixing point for the route that the census enumerator travelled on that day, 162 years ago.
He came from Leadsmithy Street, close to St Michael's Church, via the Town Wharf and along the canal towpath, past the Robin Hood public house on the corner of Wych House Lane and then up the lane, past the salt works cottage (number 13, now demolished and then to numbers 11 and 9.
I have come to the conclusion that numbers 1 to 7 had not been built by 1851(this is only an assumption, and I have no proof), but they certainly were there ten years later and were covered in the 1861 census.
As mentioned above, the building in the centre of the main picture was the first Catholic Chapel in Middlewich, which was built in 1864. The town's first Catholic School was added in 1869.
The building behind the chapel with the unusual tower is the Wesleyan Chapel, and the roof to its left is the Centenary Sunday School in Lewin Street. This photograph dates back to the 1960s.
© Malcolm Hough 2013. Reproduced with permission.

We're very grateful to Malcolm, who is the brother-in-law of John Andersen of Andersen Boats and still lives in Wych House Lane, for this fascinating article, which solves another of our Middlewich Diary mysteries, first considered in July 2011 when we published this colour slide: 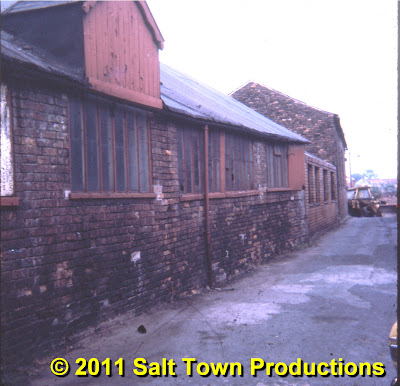 In this diary entry  we formed the opinion that the furthest building from the camera in this shot was too 'gimcrack and jerry-built' looking to ever have been a church, an opinion now proved way off course by Malcolm's excellent article
There's little real doubt now that the two buildings are one and the same and that Middlewich's first Catholic Church ended up as a ramshackle and tumble down part of  Seddon's waggon repair works, tacked on to the typical salt works buildings nearer the camera.
I did say in that earlier post that I had some dim recollection of the building in question having some 'vaguely ecclesiastical' looking windows', but couldn't trust my memory on the subject.
It seems that I should have.
Strange to think that this historic building was bulldozed and carted away along with the rest of the site's motley collection of brick and timber industrial sheds and workshops in the 1970s without, seemingly, anyone knowing, or caring, about its significance.
Unless, of course, someone knows otherwise. We'd be delighted to be proved wrong on this and shown that someone did care and took the trouble to at least make a proper record of this chapel before its destruction.
The modern Wych House Lane is still recognisable as the same thoroughfare, but is much altered.
Here's a before and after feature showing the lane as it was in 1974 and 2011 and we'll be doing some more 'before and after' shots in the near future.- Ed