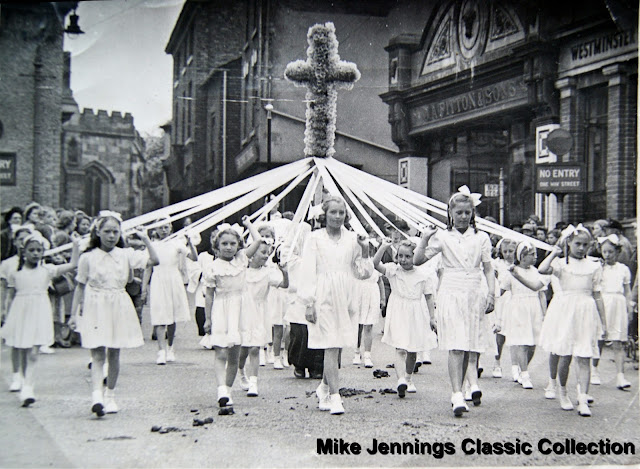 by Dave Roberts
Here's a photo from Mike Jennings, who tells us that his mother knows the names of everyone pictured in this Whit Wednesday walk in Hightown in the early 1950s.
It took us a while to arrive at a proper description for this photograph. At first we thought it might have been a May Day procession (and my description, when the Facebook link was created for this entry talked of a 'maypole', largely because of the ribbons; it reminded me of the maypole we had a Wimboldsley school in the 1950s which I myself used to dance expertly around, if anyone can imagine me doing such a thing), but the obvious religious flavour of the occasion made us think again, particularly when Geraldine Williams said, 'Is it definitely a May Day procession? It's obviously a church group (check the surplice on the fellow holding up the pole); and it's a bit short for a maypole - he would be in great danger of strangulation once the dance got going unless there's an extension somewhere! And is it my imagination or had they caught the short straw in the order of procession and were following a horse-drawn vehicle (judging by the state of the road!)'
Geraldine also had some ideas on who some of the people in the picture might be: 'I think I recognise the tall girl in the centre, who has allowed the compulsory hair ribbon with bow to slip down to a more flattering position! I also think I know the second girl from the left, but I'll await Mrs Jennings' verdict.'
Cliff Astles also recognised at least one of the people in the picture: 'One of them, for sure, is my wife Barbara Elaine Astles, nee Evans of 6 Cross Lane. She is on the far left of the picture'.
Barbara added, 'It was a St Michael's Church event and took place every Whitsuntide. We would walk from the church along Wheelock Street, stopping a number of times to perform a maypole dance - winding in and out of the ribbons. I can't remember if we went back to the church, but there were always crowds of people watching the procession as we went along Wheelock Street'.
The setting will, of course, be familiar by now to even the newest Middlewich newcomer, partly because it's still very recognisable with Fitton's butcher's shop and the Natwest Bank (then known by the rather more dignified title of the 'Westminster Bank' and soon to be just a memory) to the right.
Finally, Mike Jennings got back in touch to say: 'Hi Dave, I've just checked the original photo of the "May Day Parade". It was sent as a letter to my mother who was serving with the ATS in Singapore at the time. The information on it confirms that it was 'The Whit Wednesday Walk 1949'.
We'll be re-publishing this entry soon with Mrs Jennings information about the people in the picture, along with some additional photos of other Whitsun walks in Middlewich which have come to light..