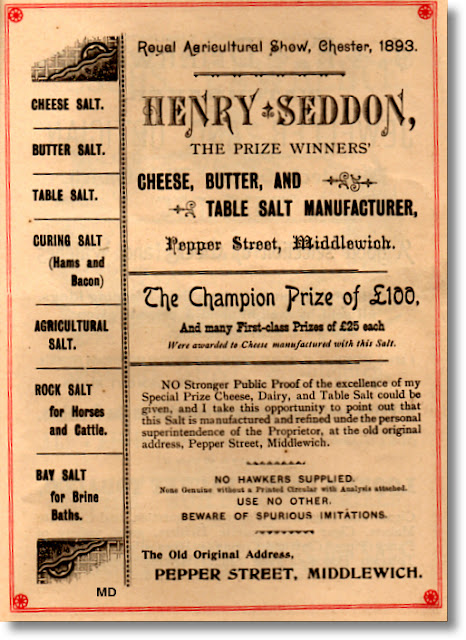 This advertisement from C F Lawrence's celebrated History of Middlewich of 1895 has appeared in many articles, books and treatises on Middlewich and its connections with salt, not least because in 1967 Henry Seddon's works in Pepper Street was one of the last open pan works to close, along with the company's other works in Wych House Lane and Brooks Lane. By that time, all three of the Seddon's works were owned by Cerebos Salt Ltd.

But over the years we've all become so used to seeing black and white versions of this advertisement  that it may come of as a bit of a surprise to see that the original carried a little bit of what is now called 'spot colour' when first published.

Who knew that in the original book, those ornate Victorian borders were coloured red?

The only other colour on the page is caused by the ageing of the paper. In 1895, of course, it would have been as white as the salt it was advertising.

It's tempting to think that salt is just salt. That fine, free running stuff that you sprinkle on your chips and  might easily mistake for sugar.

But, actually there are many different types of salt and they all have different uses.

This was as true in the open-pan era as it is today.

This is why Henry Seddon's advertisement talks of 'Cheese Salt', 'Butter Salt', 'Curing Salt (for hams and bacons)' 'Table Salt', 'Agricultural Salt', 'Rock Salt' and 'Bay Salt'- many of them reminders of Middlewich's position in the very centre of the largely agricultural county of Cheshire.

Rock Salt, of course, is mined rather than produced from brine, and would, presumably, be bought in by Seddon's either from Northwich or Winsford.

Bay Salt, which is usually produced from sea water, may well have been produced by Seddon's at Pepper Street.

They had a large open air pan which, with a very low fire underneath it, may have used the action of sunlight during the balmy Middlewich summers to produce this soft 'bath salt'.

You'll note that Henry Seddon claims that  Pepper Street salt was 'manufactured under the personal superintendence of the Proprietor, at the old original address, Pepper Street, Middlewich'.

Victorian hyperbole, of course, which sits nicely alongside the usual exhortions to 'Use No Other' and to 'Beware Of Spurious Imitations'.

As for that 'old, original address': as we've said before, we have always assumed that the salt works found itself in Pepper Street because someone in the local administration of the time had a sense of humour when it came to coming up with street names.
On the other hand, 'Pepper Street' is quite common in the area as a street name; there are examples in nearby Chelford, in Nantwich and in Chester. There's also a very well-known example in London, not far from Canary Wharf. Most Pepper Streets are named for the fact that they were places where Pepper and other spices were sold, but we are wondering if the prevalence of the name in Cheshire comes from an association with some long-forgotten family which also bore the name. Cheshire historians have long pondered the origin of our Pepper Streets, concluding that 'Pepper' is probably a corruption of a much older name - possibly 'Pepur' - but that the derivation is 'not certain'. Whatever the truth of the matter, 'the salt works in Pepper Street' was always a source of amusement locally.

*One of the very first articles I wrote for the Middlewich Heritage Society back in the 1980s was based on an interview with Joe Clarke who had worked in the open pan salt industry for many years. He told me that workers in the industry were under strict instructions not to tell the public about the often strange and potentially off-putting additives used to produce different types of salt.