Here's a picture from the Paul Hough Collection of the celebrated 'Butcher Lee's' shop in the Bullring, Middlewich - an establishment we last caught a glimpse of  here.
This is, of course, a posed shot with the staff of the shop obviously proud to be photographed alongside their fine array of animal carcases.
That  ornamental gas lamp which appeared to be sufficient to light the entire area is not included in the photograph, but part of its base can just be seen on the the extreme left.
Messrs Curzon and Hurley feature this photo on page 103 of their book Middlewich (Images of England, Tempus Publishing 2005) and suggest that the ponies and traps in the picture may have been there to collect meat for one of the large houses in the town, which may well be so.
The caption for this picture as printed in the book in question suggests that the road to the left is Kinderton Street, but surely it would be Lower Street, even in those days.
Kinderton Street has always started on the Holmes Chapel side of the Town Bridge.
Something that never seems to be mentioned in connection with this well known Middlewich scene is that the left hand side of the building we're looking at is not actually part of  'Butcher Lees' but an entirely separate business which appears to be called the CENTRAL HARDWARE STORES.
As we mentioned when looking at Kath & Barry's fascinating old photo of the Bullring (link above) this building later became a bank before being demolished in the 1930s, together with the shop behind it, to make way for the railed area which was the first site for the town's war memorial (although it would appear that the actual site of Butcher Lees shop became an improved access road from Lower Street to Hightown).
And for those who like to know 'what's there now', this is the best we can do for the present: 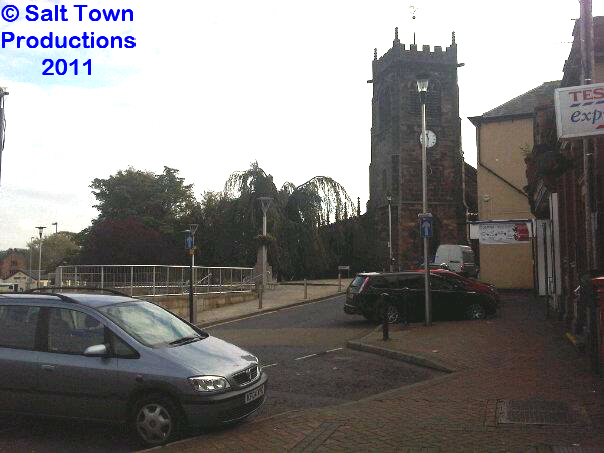 'Butcher Lees' would be just behind the car on the left.
Posted by SALT TOWN PRODUCTIONS at Wednesday, March 28, 2012