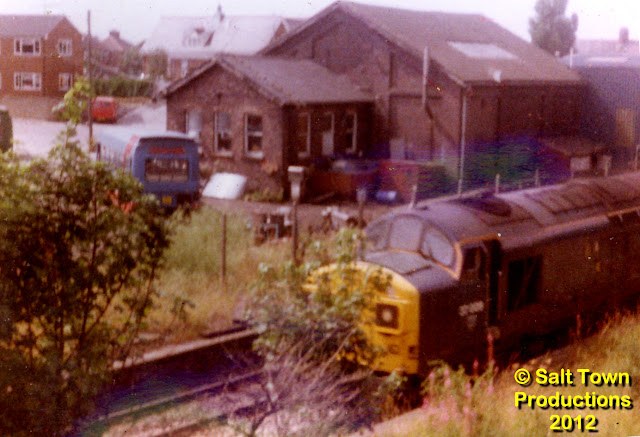 A slightly blurry shot of the former Middlewich station yard in 1989. The object of the exercise was to get a picture of that diesel loco which is trying to sneak by in the foreground.
By this date trains on the Middlewich Branch were getting rarer - during the sixties and seventies the line was very busy with freight, in particular with oil trains travelling from Stoke-on-Trent to Sandbach, via the Middlewich line to Northwich , then  from Mouldsworth on the Mid-Cheshire line to Helsby and thence to Ellesmere Port.
We've entitled the picture 'Middlewich Station' but in fact the actual station building had disappeared by this date.
As can be seen in earlier Diary entries (see below) it was a single-storey wooden building much like many other buildings on London & North-Western stations.
In our picture a modest fence separates the railway from the site of  its former station, and a row of tall poplar trees has now grown up along the same line.
This is the  Northwich-bound platform. The now-vanished station building's counterpart on the opposite, Crewe-bound, platform was razed to the ground during the 1960s by workmen burning grass on the adjacent embankment.
This practice, long since abandoned for, presumably, health and safety reasons, was known as 'burning the batters'
As we have seen in those previous Diary entries by this time Martin's  was well entrenched on the station site and using the old goods shed and attached office as part of their business, which gradually moved from Bus and Coach sales to MOT Testing of commercial vehicles, a service the company still continues to offer not far away in Brooks Lane.

SEE ALSO MIDDLEWICH STATION EARLY 1990s and follow the links to various other pictures of the station and its surroundings over the years.
Posted by SALT TOWN PRODUCTIONS at Tuesday, March 27, 2012