by Dave Roberts
Regular Middlewich Diary contributor Carole Hughes has been given access by her friend Diane Parr to a brilliant collection of photographs showing Middlewich as it was twenty-five years ago. All the photographs are now safely filed in the 'Carole Hughes Collection' and we'll be bringing them to you from time to time during the rest of 2012. Many thanks to Diane and to Carole for letting us show you these photographs.
We're starting with this one because, just by coincidence, I was looking the other day at an old MHS Newsletter from September 1992 which was when the building shown here was finally demolished.
It started life as one of many Co-op shops in Middlewich and I have dim recollections of it as a dress shop (or, in Co-op parlance, a drapery department).
It had a glass display case in its entrance hallway, making it look very sophisticated and cosmopolitan. You could imagine the very best people buying their clothes there.
By 1987 it had become Oates Builder's Merchants (or, if the sign is anything to go by, Oates Builder  Me chants) and was looking a little the worse for wear.
In the early 70s, when I was still working in Middlewich UDC's Rates Office, I applied for a job at at this establishment, at that time called Thomas Eyres Ltd, and was interviewed by somebody who blew cigar smoke at me throughout the interview and I could never have worked with.
In those pre-computer days the job involved writing out orders for building materials on printed forms and handing them to this cigar smoking lunatic for processing.
'I hope you can write clearly!' he shouted at me, enveloping me in a choking blue cloud, 'I tend to get VERY ANGRY if I can't read things!'
Fortunately I wasn't offered the job. But it's interesting to note that if I had got the job my workplace would have moved a matter of yards across Lewin Street, and I could have gazed down on the windows of the rates office from one of those upstairs windows.
By 1992 Thomas Eyres had transmogrified itself into Oates which, in turn, had become Hall & Co. At this point plans were announced to demolish the building 'to improve access'. 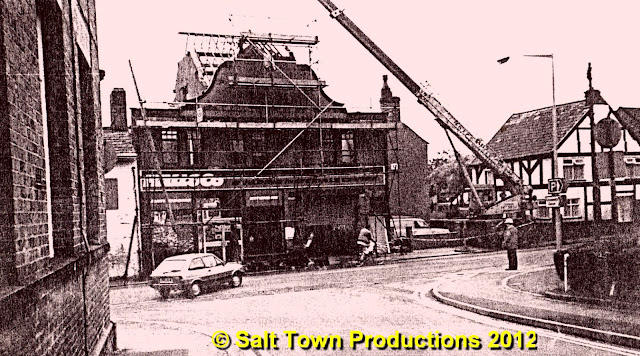 Here's what I had to say about this in the September 1992 edition of the Middlewich Heritage Society Newsletter in a caption for the above photo:

Demolition begins on the showroom premises of Hall & Co in Lewin Street. There was something of an outcry locally over the destruction of this former Co-op shop, but the Heritage Society raised little objection, rightly concluding that whatever architectural merit the building had ever had had already been destroyed by mutilation of the shop front and the erection of the garish 'Hall & Co' sign which, we will record for posterity, was bright orange and blue.
Perhaps whatever replaces this building will actually be an improvement?

Of course at the time it never occurred to anyone that the building might be replaced by nothing more than a gateway into the builder's merchant's yard.

Just in case you haven't got your bearings precisely, we're standing at the bottom of Civic Way (that's the Council offices on the left of the 1992 photograph). The house to the left of the building still survives, as does that quirky little cottage on its right.

UPDATE: By 2012 this builder's merchants had changed hands  again and had become a branch of Jewson's

Geraldine Williams I think your glasses may be a little rose-tinted in your memories of the Co-op drapery store, Dave. I seem to remember yards of net curtaining and tea-towels being on display but, to be honest,
my Mother didn't shop there so my only occasional visits were with my Gran on Co-op divi day!

Dave Roberts Ah yes! A case of distance lending enchantment to the view (a distance in time in this case). I think they also had one of those change-giving systems running along a wire connected to the cashier's office.

Geraldine Williams Yes, I think they did. I wonder if it was because the 'Management' didn't trust the assistants' arithmetic or the obsession in the old days with every transaction having to be written down? The only alternative was the fantastic Meadow Dairy verbal running total system which we discussed previously.

Dave Roberts Well, it seems my memory has served me quite well on this occasion. We've received a comment from Cliff Astles who appears to confirm my childhood impressions of this shop as something rather special. I'm reproducing Cliff's comment here as it's relevant to the history of the shop and I wouldn't want anyone to miss it:

This particular Co-op shop was the town's main drapery shop, selling clothes of all descriptions for both men and women.
They did have a spectacular glass entrance to the shop with windows at the front and each side with a glass central piece allowing for access each side of it into the shop. You could buy all types of material and cottons, lace etc.
It also had the latest technology with the accounts and tills upstairs! The money tendered for goods was whisked away upstairs by a circular 'vacuum facility' much like a drain pipe and the change was also sent back by the same method.
All goods sold in the Middlewich Co-op shops allowed for a 10% dividend to be paid out each year (I think) on the value of goods sold to that person.
This dividend was also paid out at this shop.
The inside of the shop was very 'Victorian' and if it was still with us today would be a place worth visiting.
The shop which is the 'Middlewich Fryer' today was also a Co-op Shop. It was a traditional butcher's shop from which I obtained meat for my mother on a Saturday morning, as she was working all day in her hairdressing business (behind Etta Mault's Chippy).
What a waste of a very good shop.
- Cliff Astles
(I think Cliff's last comment refers to the old Co-op drapery rather than the Middlewich Fryer. It goes without saying that turning any shop into a chip shop is never a waste... -Ed)

Geraldine Williams Thanks for not putting 'Nah, nah, nah, nah, nah Geraldine!' (as if...Ed) Ha ha. As I've said before, for all its altruism, which is not in doubt, there was something insidious about the Co-op movement, which had a finger in every pie, when seen through the eyes of other shopkeepers (like my parents) who were trying to earn a living. Which is why my family never frequented Co-op stores!

Dave Thompson  Happy Days! I worked there during school holidays when it was Thomas Eyre's, then full time when it was Oates Builders' Merchants.
The front building was a fitted-out showroom with bathroom and kitchen displays - I sold hundreds of Ideal Standard and Twyfords bathrooms from there!
I worked with Phil Flaherty there for about ten years, until I went back to ERF for more money - which lasted 14 months!

It's interesting to note that Dave, who's now the Town Council's Events Manager, actually did make that trip across the road (but in the opposite direction) from Builder's Merchants to Council offices. Took him a few years, though. - Ed