We've looked at Southway before in our travels around Middlewich and it's interesting when comparing this 1987 view with its counterpart from thirteen years earlier... 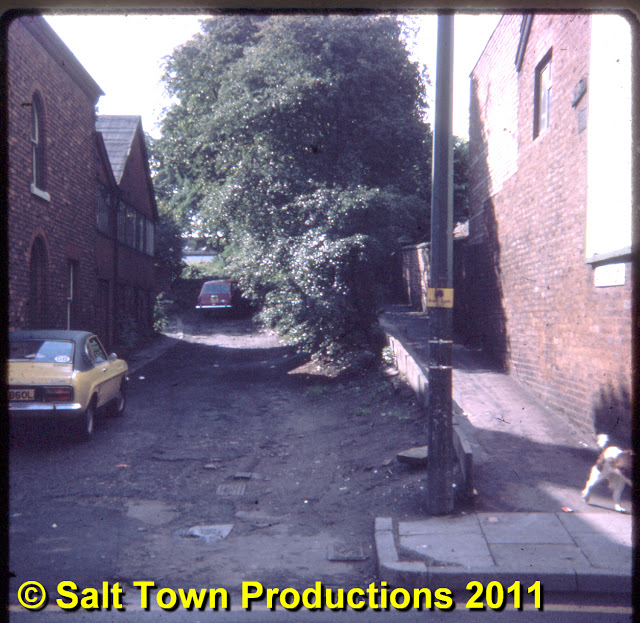 ...as seen in this diary entry, to see that not a lot changed in this area in that thirteen years.

Southway proper - i.e. the footpath seen on the right hand side of this picture - still provided a shortcut into town for people in the St Ann's Road area, and the 'dirt track' with a rudimentary pavement to the left  which we now think of as 'Southway', and was used mostly for car parking in those days, also remained untouched.
That strange red lead painted building we encountered here is also still standing at the rear of the shop on the corner.

It's only when you look at the middle of the picture, and at what's happening at the end of that 'dirt track', that you realise just what is going on.
We're seeing the very start of Middlewich's slow-burning shopping revolution with the building of the Gateway Supermarket on the field where the Orchard Works had stood until a few years before.
The temporary fence, just to the left of the trees, which separates the building site from what will become the supermarket's pedestrian approach is the approximate site of that 'pagoda' structure which welcomed shoppers walking towards the supermarket from Wheelock Street first to Gateway, then (from 1994) to Somerfield and which currently (since 2009) welcomes them to Tesco.
As we've said before, it all looks so familiar and yet so different.
You can learn more about the convoluted history of Middlewich's first proper supermarket here.
Posted by SALT TOWN PRODUCTIONS at Thursday, March 29, 2012