M-FAB MEMORIES: COPING WITH THE CAMPERS! 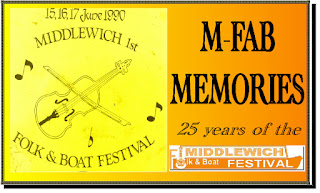 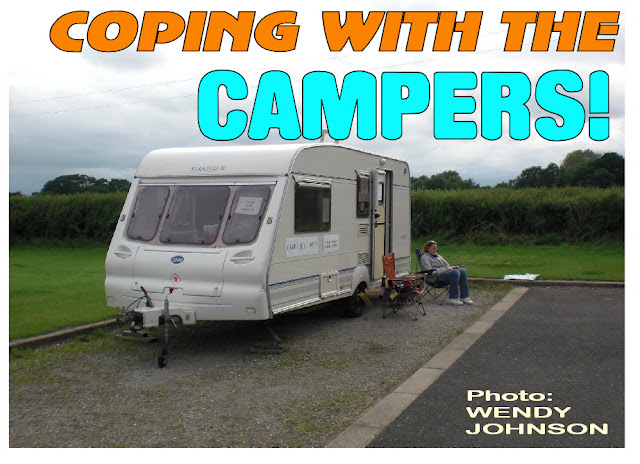 I remember looking after the camp site on Sutton Lane Playing Fields for a few years.
We used to accommodate over two hundred units -caravans, motor homes, tents etc, and each unit had anything from one to eleven or twelve people in it!
That represented a tremendous number of visitors from outside the area visiting the town.
I was a one woman guardian of that field and got practically every penny owed by the campers.
The money went towards the cost of hiring the field and changing rooms and associated expenses.
Not much got past me!
Living with a garden gate leading onto the field meant that we had times when we were called upon to tow units out of the muddy field at midnight, or later.
Cleaning the changing rooms and  attending to the toilet facilities regularly wasn't fun but was very necessary.
Additional  water for the toilet block was fed from our garden tap, so our plants suffered in hot weather!
I took our caravan onto the field for use as a site office and would spend the entire weekend there.
I even used to sleep in the caravan, though I wasn't missed much as my husband was usually on stewarding duty.
Several times, I went to bed extremely late on the Sunday night but was up in time to 'man' the field gate by 6am, when security left, in order to prevent an influx of approaching 'caravans'!
There was an incredible amount to organise, and it was hard work, but very rewarding!
Day passes and weekend passes for campers, morris dancers, performers, all had to be organised, along with arranging a taxi service to and from the camp site and town. On top of this there were many other ancillary items to be attended to.
When we eventually got them all settled, I sometimes went into town to join my husband in  doing  a bit of stewarding.
I think the  most problematical - and funniest - thing that ever occurred during my time at the camp site was when the security man went to relieve himself at the Gents' urinal in the changing rooms during the early hours of the Saturday morning.
He reported to me that he thought there must have been an earth tremor, because as he stood there, doing what comes naturally, the floor literally heaved upwards under his feet and then gave way resulting in  a large dip across the floor and leaving him feeling quite disorientated!
Later inspection showed that the drains had collapsed and the 'facilities' were taped off as dangerous!
Try explaining to the male masses that there were no Gents' loos for the weekend! 'Emergency measures' were brought in and many had a good laugh at the expense of the poor security guy!
Great fun was had on the camp site with people returning year after year.
I still miss the buzz!
There are lots more stories I could tell, but most of them are not necessarily for public consumption!
Hilarious!
Many many people have been involved in running the Folk & Boat Festival over the years. Those who I remember from my time include Laura Holmes, Lizzie Rosenfield, Andy Johnson, Ray Archer, Andrew Bickerton, Kate Nichols Fletcher, Sarah Butler, the late Keith Bagnall and so many more people who made MFAB a superb success for many years.
And thank you to Middlewich Town Council for taking over the reins when costs prevented us volunteers from making it break even due to costs beyond our control.
No one notices the back room guys. But it never mattered to us. We loved what we did and threw ourselves into it for the weekend and  never expected recognition. What was important was the success for the town and the enjoyment of the visitors.
If the visitors were happy, then we were too. Happy people, job done!
Such a shame we no longer have visits from people from outside the area. But I'm glad the festival survives in its new format.
I'm left with so many happy memories and recollections of people who came to our town year in, year out - from all over the UK.

Edited by Dave Roberts
With thanks to: Simon McGrory
and Middlewich FAB Festival