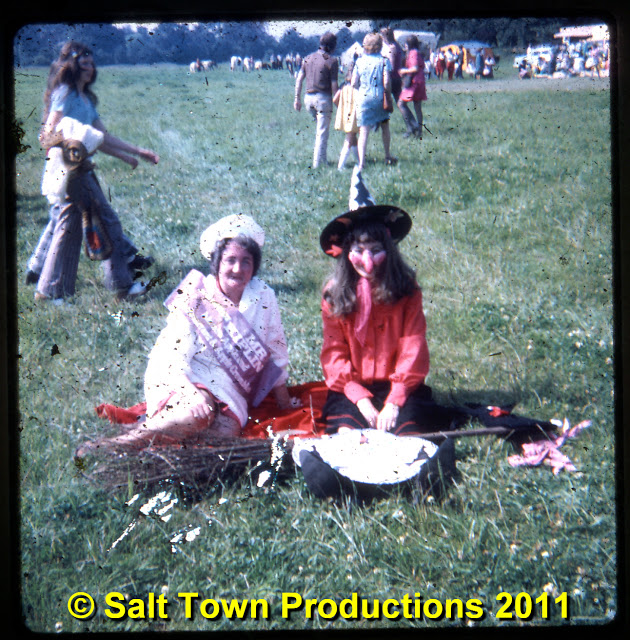 The other lady is a walking advert for Mr Kipling who, you'll recall, did make exceedingly good cakes. Mr Kipling was part of the same company which owned RHM Foods (now, like much else, consigned to history).

The Carnival that year was held on what had been the grounds of Middlewich Manor, so these two happy souls are sitting not too far away from where I'm sitting typing this - the difference being that they're in the middle of a field and I'm in the middle of a housing estate.

That's what 38 years can do. Does anyone know who these ladies are?

Note: This was, obviously,  written when we were living in Whitley Close.

Geraldine Williams Powell's the Tailors used to have a brass band which I always thought was called 'St Henry' but I think it was just the Middlewich pronunciation of 'Centenary'! They always played for the carnival procession (and also the Carnival Queen's procession with her retinue round the field) and for a child living in Wheelock Street there was no more exciting sound than the opening beats of the bass drum as the band set off from Powell's.
The carnival was also held on land at the top of Sutton Lane on what is now the campus and housing estates.

Dave Roberts Yes, that's the place I'm referring to. Some people call it the 'Manor Estate', though I don't. The carnival procession used to end in that top bit of Sutton Lane, and everyone would go onto the field through a gap in the hedge, round about where Rushton Drive begins today. The Manor itself (now a nursing home, of course) is about 50 yards from where I am sitting now.
...and the Centenary Band, the last time I heard of it, had become the Roberts Bakery Band. I used to think it was 'St Henry' too!
Posted by SALT TOWN PRODUCTIONS at Monday, June 04, 2018