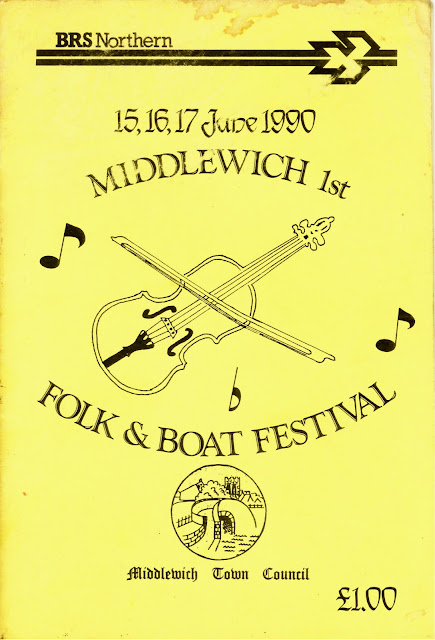 Times have changed, and so has Middlewich, in the twenty-six years* since the first Folk & Boat Festival in June 1990. Nothing illustrates this better than a glance at the programme from that first Festival. Sponsors for the inaugural event were BRS Northern, who had a depot in Middlewich at that time, and Middlewich Town Council. Quite why BRS should have been involved in sponsorship of the event is lost in the mists of time, but funding for the first Festival was gathered by the late and still much-missed John McAteer and John may well have been having dealings with the firm at the time and levered a few quid out of  them as part of some other deal. It's interesting to note that the Town Council was using its familiar canal-bridge logo all those years ago. It's stood the test of time, the only thing to have changed being the typeface.

UPDATE: Shortly after this Diary entry was first published something quite remarkable happened. We were contacted by Mike Buckley, the man who originally created the very first Folk & Boat Festival artwork, as seen on the programme cover above, over a quarter of a century ago. Mike now lives in Cuddington.
He writes: 'John McAteer persuaded me to produce the artwork for the very first FAB event all those years ago. Computer design capabilities were limited in those days and I well remember John being meticulous with regard to the placement of the curved lettering. I'm sorry to hear of his passing. RIP. We used to share a pint or two in the Boars Head with someone called Len, who was a badminton player. His surname escapes me. I did the artwork while working for what was then ICI, using an early artwork generating programme. Incidentally, the same programme was used to produce the Winnington Park Recreation logo, though not by me'.

Congleton Borough Council also sponsored the event but, for some reason, didn't get its logo on the front cover. The price of the programme was, as can be seen, £1 and the cover price remained at this level for many years, on the grounds that people would reach into their pockets and hand over a pound very readily. Any more than £1 and some of them would think twice...

* Although we're celebrating the 25th Festival this year, it's still worth reminding ourselves that it was twenty-six years ago that MFAB started. The 2001 Festival never happened because of the Foot and Mouth disease which was causing havoc in Cheshire's rural and semi-rural communities that Summer. 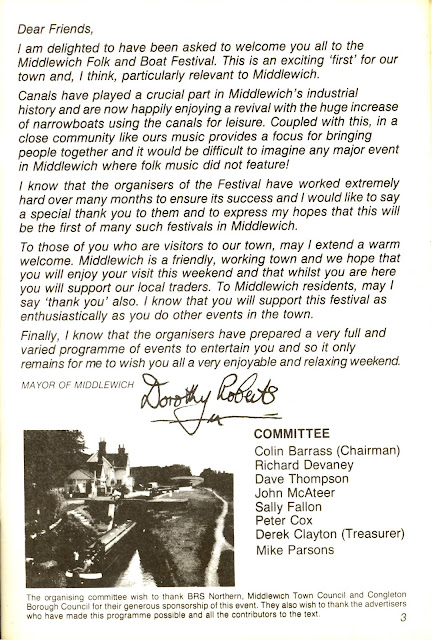 Dorothy Roberts was Mayor of Middlewich in 1990 and wrote this introduction to the programme in which she managed to encapsulate in a  few words everything that MFAB is (or was) all about. The first committee listing follows. My name doesn't appear there because, although I was invited to join  the Festival as MC after the first meeting, I insisted that I would 'never' be on a committee! Before the first Festival had even taken place I found that I had become the publicity officer! 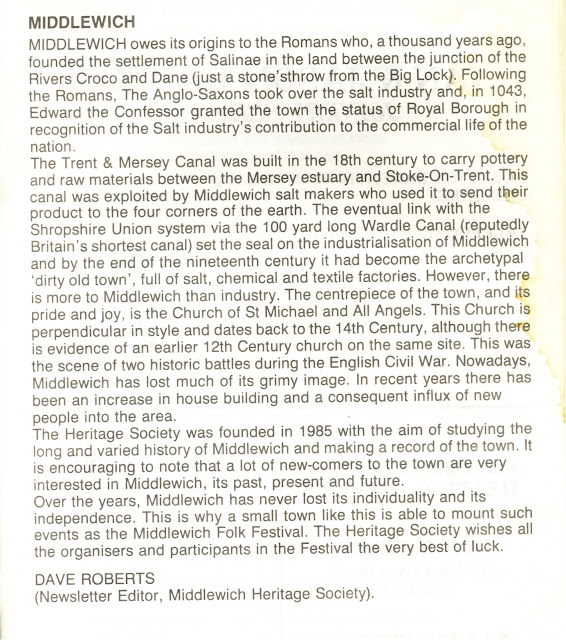 The Folk & Boat Festival was designed to bring people into the town and it was felt necessary to introduce Middlewich to our visitors, many of whom would have heard very little about the town, other than the 'Wiches of Cheshire' stuff taught to them in school geography lessons.

So I donned my Middlewich Heritage Society hat to write this potted history.

Note that I refer to the event simply as the 'Middlewich Folk Festival'.

However, the shortened version, the 'Folk & Boat' has a certain ring to it (and, of course, sounds a bit rude if you say it quickly) and so that was the version which won out in the end.

When Middlewich Town council took over the event in 2011 the name was officially changed to Middlewich FAB Festival to reflect the new way in which the event was funded and run and also to stress the move away from 'purely folk' and towards the willingness to embrace other kinds of music. 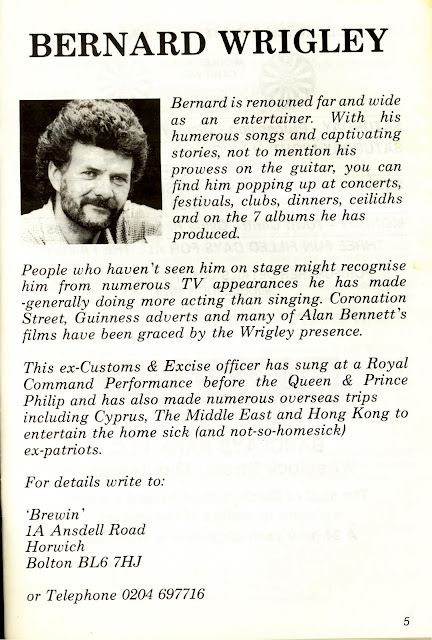 Our first ever guest, the legendary Bernard 'the Bolton Bullfrog' Wrigley. Bernard was part of the 'folk-comedy' boom in the 1970s, along with Mike Harding, Billy Connolly, Max Boyce, Jasper Carrott and others and has also made numerous TV appearances, as mentioned above.

He appeared in a cameo role in Victoria Wood's Dinnerladies, combining his roles of actor and singer in a version of Jingle Bells with concertina accompaniment!

Bernard also returned for the second Festival and in subsequent years, notably in 1994 when, to celebrate the first five years of MFAB he appeared as guest MC.
His performance in this exacting role was shambolic, rambling, undisciplined and erratic. It was also hilariously funny.

Wouldn't it have been nice if he could have been here for the 25th anniversary? 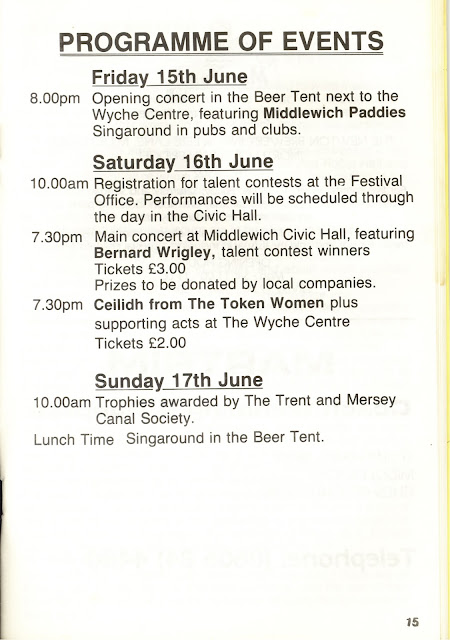 The Friday concert in that first marquee consisted of songs from the Middlewich Paddies interspersed with 'poems' from me (more correctly monologues and comic verse).

The main concert on Saturday was Bernard with - you've guessed it - me again!

Fortunately Bernard appreciated my attempts at comic verse, and we later collaborated on a few things, including the Lion & Albert follow-up, Albert, The Lion & The Drink (1992).

Notice that the Token Women were appearing at a ceilidh at the Wych Centre at the same time. They are the 'Female Ceilidh Band' referred to in the (in)famous publicity below.

Also appearing at the first Festival, but not listed here, were Flotsam from Manchester and Dempsey's Lot who joined us from Birmingham.

And making the first of many appearances at the festival over the years was the legendary Boat Band. 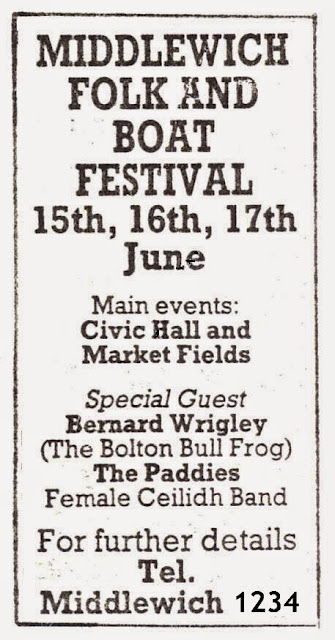 The first ever publicity for the Festival, which appeared in the Middlewich Chronicle in May 1990, leading those not in the know to think that the Middlewich Paddies were 'a female ceilidh band'

They're not, of course. A ceilidh band, I mean.

The actual ceilidh band in question was The Token Women. 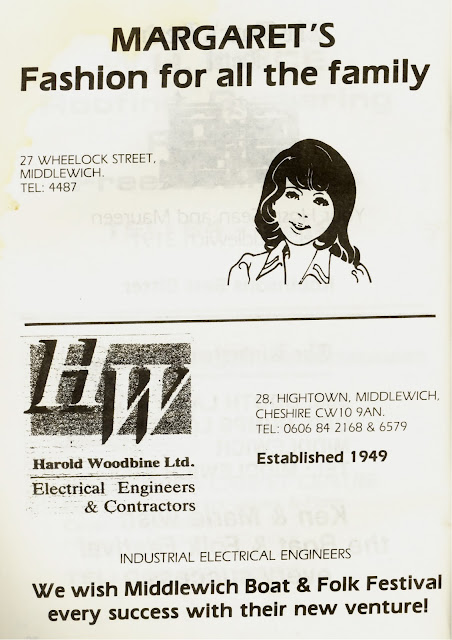 As might be expected, the programme for the first Festival is packed with advertisements for local businesses, some of which are still with us.

Others, however, have now passed into history, including Margaret's (although Margaret herself is, thankfully, still very much with us) and that well-known Middlewich name Harold Woodbine Ltd, a firm which has now decamped to Sandbach.

Note that Woodbine's are following  T&M Society practice and referring to the Festival as Middlewich Boat & Folk Festival! 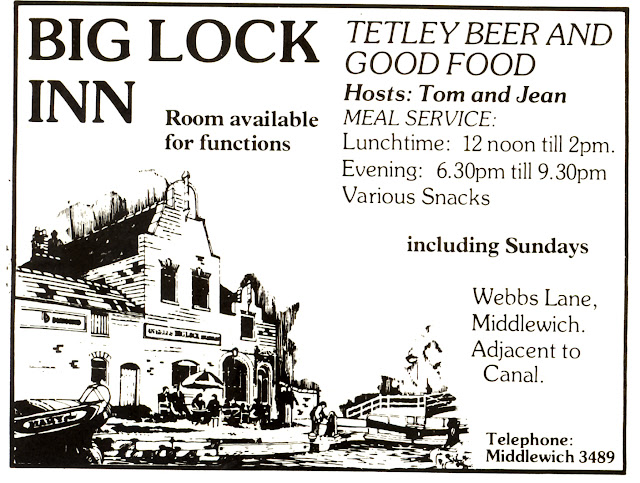 Other businesses, notably public houses, have changed hands over the years, and it comes as a bit of a novelty to find ourselves welcomed to the Big Lock by 'Tom and Jean'.

It's helpful of them to point out that the Big Lock is 'adjacent to the canal', though.

Elsewhere in the programme 'Sean and Maureen' are welcoming us to the Boar's Head and 'Liz and Ray' to the Newton Brewery.

And at the other end of town, we're invited to the long-defunct Kinderton Arms by 'Ken and Marie'.

It all seems such a long time ago.

A different time and, in many ways, a different world. 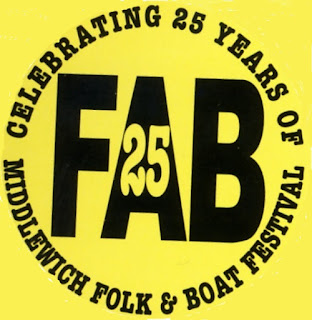