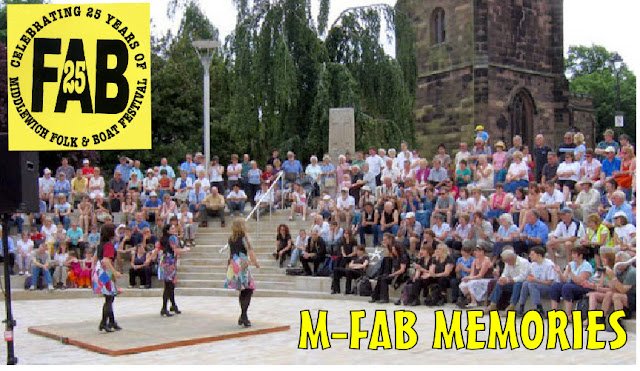 Of all the various things I've been involved with locally in my nearly 65 years in Middlewich, I am, of course, proudest of my involvement with the Middlewich Folk & Boat Festival. More than anything else that's happened here over the last 27 years, the 'Folk & Boat' gave our town back its community spirit, its 'sense of place' and its reason to be cheerful, if only for one weekend a year. With all due respect to everything else that goes on in Middlewich, this is the event that really put us on the map, and paved the way for all the many and varied events that go on year by year, month by month, week by week, and day by day in our 'forgotten town'. Here we are in 2015 looking back on how it all started...


TWENTY FIVE YEARS OF THE FOLK AND BOAT...


The year 2015 is a very special one for our town's original and unique music festival, as we celebrate twenty five years of the 'Folk & Boat'.
This milestone should, of course, have been reached in 2014 but, as we all know, an outbreak of foot and mouth disease in 2001 meant that that year's festival had to be abandoned.

Here's the story of the festival's origins, according to current festival organiser Dave Thompson:


The Middlewich Folk & Boat Festival came about following a conversation in the Boars Head, one evening in 1989…

Folk singers the Middlewich Paddies were keen to start-up a festival and, just by chance, the Trent & Mersey Canal Society wanted to organise a boat gathering- and in no time at all the `folk & boat` festival was born!

A group of willing volunteers were quickly rounded-up and thanks to welcome support by Middlewich Town Council, Congleton Borough Council, and BRS Northern, the first festival took place on 15-16-17 of June 1990.

Hosted by the Middlewich Paddies the weekend featured a concert by folk-comic, Bernard Wrigley and a ceilidh (a bit like a barn dance) by Token Women.


The first Talent Competition took place in the Wych Centre. There were music sessions in the beer tent and local pubs, along with Morris dancing by SIX TOWNS MORRIS and the boat rally provided the activities and entertainment for the weekend- a wonderful occasion that just had to be repeated

* Editor's note: Although my original role was supposed to be strictly that of MC, and although I was at pains to point out that I was not prepared to be on any committee, John McAteer, the guiding light behind MFAB and the man who did a lot behind the scenes to make sure the festival actually happened, had other ideas. He invited me to go along to one of the first committee meetings 'to see what it was all about'. I left that meeting feeling excited, slightly bemused and wondering how I had somehow, almost without realising it, become the festival's publicity officer! - DR

More than any other event it was the 'Folk & Boat' which steered Middlewich in a new direction after several years in the post-industrial doldrums.
As recounted above by Dave Thompson, enthusiastic members of the community put forward the idea of a Music Festival based on successful events in places like Newcastleton and Melrose in the Scottish Borders and, nearer to home, Nantwich and Chester.
The 'Folk & Boat' (and, yes, we did realise right from the start that if you said it quickly it sounded a bit rude - that's one of the reasons why we chose the name) was intended to be a mostly low-key pub singaround style festival hosted by the (far from female) Middlewich Paddies and featuring as special guest Bernard Wrigley who had already made several appearances in Middlewich at the Boar's Head Folk Club.
The compere was the then ubiquitous Mr Roberts who filled in time between acts (all two of them) with some of his allegedly funny poems.
Everything took place in a small marquee  on Market Field, at the Civic Hall (since renamed the Town Hall)* and in various pubs around town.
The first festival, although very simple by comparison with  MFAB events in later years, was a resounding success and the organising committee knew before the weekend was over that there was no going back and that the Folk & Boat was an opportunity to put Middlewich on the map.
Feedback from visitors to the festival made everyone realise that the town, with a history stretching back at least to Roman times, had  a story to tell and that people would gladly come from far and wide to hear it.
Over the years MFAB was involved with many local charities, and also helped provide educational resources to local schools and institutions. The Stacey Pushchair Appeal, organised by the Middlewich Chronicle, raised funds for a specially adapted pushchair for a local youngster.

In 1999, when its tenth anniversary came around, the Middlewich Folk & Boat Festival was well established as one of the top ten music festivals in the North-West and Middlewich was getting more and more enthusiastic about using its own history and heritage as a way of attracting visitors.


By the year 2000 the festival had become a must for many people who travel around the country year after year on the folk festival circuit. The Millenium was celebrated in typically idiosyncratic Middlewich style with 'Middlewich's own Millenium Dome' and the story is told here.


The Festival of 2005 was the first one to make use of the newly-completed 'Amphitheatre' in Middlewich Town Centre  and this photo illustrates just how popular the dance and music displays are with people of all ages, whether local or from further afield.

And so the story of MFAB continued...

After many years as an independent festival the Folk & Boat Festival eventually ran into financial difficulties, a fate shared by so many similar festivals over the years.
Happily, the Middlewich Town Council, which had supported the festival from the very beginning, stepped in and rescued this iconic Middlewich event, enabling it to continue and to carry on bringing fun and entertainment to both townspeople and visitors for many years to come.
The Middlewich Folk & Boat Festival was subtly renamed to become the Middlewich FAB Festival, reflecting the change in the way in which which the festival was funded and organised. At the same time the 'strictly folk' policy of the festival was relaxed and music of all kinds began to be featured.
To many, of course, it will always be the 'Folk & Boat', whatever its official title might be. 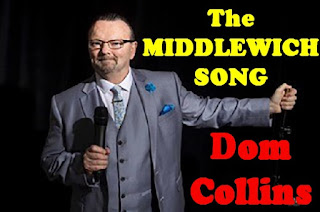 THE MIDDLEWICH SONG by Dom Collins
(A Salt Town Productions video)
One man's fight to appear at the
Middlewich Folk & Boat Festival!
Features some great photos of the Festival by local photographer Cliff Astles. 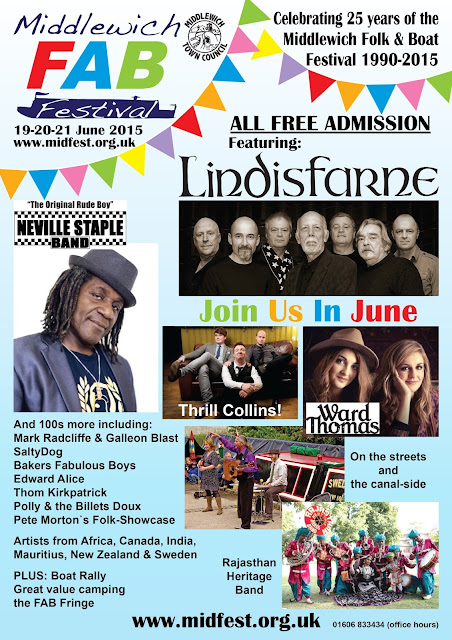