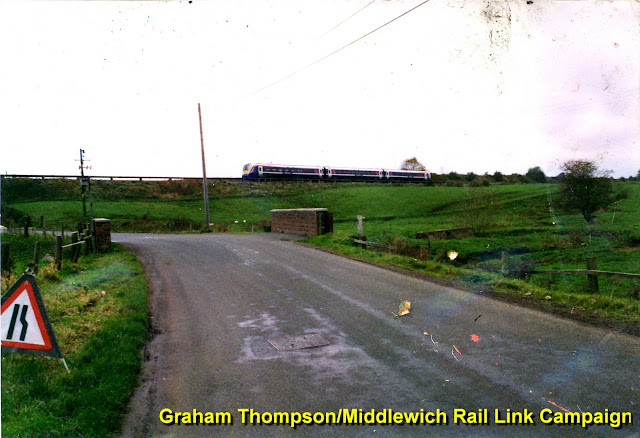 Here's a picture taken in Cledford Lane, close to the legendary 'Dam', by Graham Thompson of Goostrey, who spent a lot of his spare time tootling around the area on his little moped taking photographs and videos of our local railways, which he would pass on to me in my capacity as Chairman of the Middlewich Rail Link Campaign (MRLC).
There are two possible reasons why Graham should have taken this picture from so far away - it may have been that he was going for one of those arty 'train in the landscape' shots. Far more likely, though, is that the train sneaked up on him and was on the scene before he could get close enough.
The train shown here would, in all probability, be diverted from the Crewe-Chester line and  making its way back to Crewe from Chester having left the Mid-Cheshire line at Northwich West Junction.
It appears to be in First North Western livery, which would place the photograph sometime in  the late 1990s/early 2000s.
The history of privatised railway companies in the North-West is as complicated as the history of such companies everywhere else in Britain.
We started off  under BR with North West Regional Railways (sometimes, apparently, called Network North West), then came North Western Trains, then First North Western and now (since 2007) Northern Rail. The train looks to me (and real railway fans will either agree or shoot me down in flames) like a Class 175 'Coradia' unit. If you are a rail fan, and care about these things, please let us know if we need to correct any or all of this information.
If you're more interested in the actual train than in its setting, here's a closer look:

It's trains like this one which have kept the Middlewich line open all these years and given us a chance of restoring our own station and local passenger service. Network Rail have always stressed how valuable the line is for diversions, and a lot of money was spent on upgrading the track and signals a few years ago.
Although all seems quiet on the MRLC front at the moment, things are going on behind the scenes which will, we hope, give us the desired result in the end. When we're in a position to say more, you'll hear it first here.
The MRLC website will be back online soon but, in the meantime, you may like to join our Facebook Group
MRLC FACEBOOK GROUP
Finally, many thanks to John Capper, who put me back on track after I inadvertently described this photo as having been taken in Croxton Lane. The brine pipeline seen in front of the train should have given me the clue.
Posted by SALT TOWN PRODUCTIONS at Tuesday, December 06, 2011