A MEADOW DAIRY TALE: THE TALE OF THE MANGLED GROCERIES by Daniel Preston 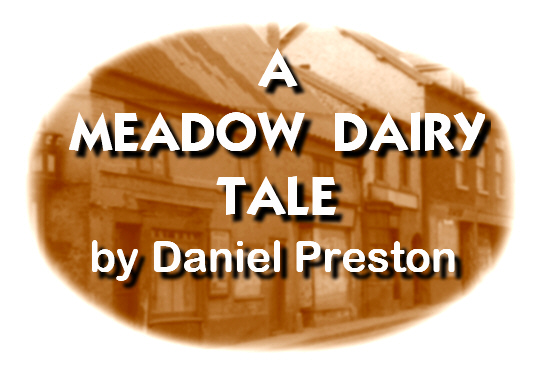 THE TALE OF THE MANGLED GROCERIES
This event took place sometime around 1965 or 1966.
At that time I delivered groceries for Meadow Dairy, which was on opposite to the ‘White Bear’.
The shop and the row of buildings it was part of have long since gone. Some of the buildings in the same row were terraced houses, their front doors opening directly onto the street. I suspect that the Meadow Dairy was at one time a house too as, like the other buildings in the row, it had a garden at the back.
The space where the buildings were is now empty and, at the back, where the gardens were, there is now a row of newer shops.
Back to the Meadow Dairy then.
The Manager was a red-faced portly man by the name of Mister Rolly.
He was a pretty good manager and treated his staff, all women apart from me, well.
I was about sixteen at the time and had this job part-time at  weekends.
I can’t remember if I was still at school or working at Foden’s in the training school.
I do remember that Nicholas Silver was still winning horse races and that, that year, What a Myth was a favourite in the Grand National (The Grand National, for the benefit of overseas readers, is a four mile steeplechase held at Aintree in . Almost everyone in the country has a bet on the race). In fact, I think I had a shilling each way on What A Myth.
My duties included keeping the stock room tidy, taking the rubbish out, burning it in a firepit in the garden at the back and replenishing the stock room.
I also had to clean some of the paraphernalia associated with running a grocery shop.
My main job, however, involved delivering groceries on one of those bikes with a great basket on the front.
The rear wheel was twenty-six inches in diameter, very robust, and had one small gear; the front wheel was of similar construction. but much smaller in diameter, so as to make room for the basket.
The seat had big springs under it and the handlebars were of the sit-up and beg type.
The bike, unlike butcher’s bikes which were black, was painted green.
If you took it on a cyclo-cross race, you wouldn’t be lifting it over too many five bar gates, I can tell you.
In those days, near what is now Long Lane South was a dirt track across a football field. It was used as a short cut from to Cledford.
The track was rough and, near the centre of the path, was a big pothole. This would fill with muddy water when it rained (which was quite often).
Groceries were ordered by ladies who came to the shop on Saturday mornings, for delivery the same afternoon, and the orders were packed into boxes with the purchaser's name on them. I then packed the boxes into the basket, which was separate from the frame on the bike that carried it. I had several trips to make as the basket would only carry so many boxes of groceries.
On this particular Saturday afternoon I had made some of my deliveries and then had to go up to the  Cledford end of town.
It was a wet day, the dirt track was very muddy and very bumpy and I had the bike going as fast as it reasonably would with the one gear at my command.
The bike and I were bouncing along jauntily and  the groceries, including some  sliced meat wrapped in that waxed white paper, were bouncing along with us.
Suddenly the front wheel went into the aforementioned pothole.
The basket leapt up, taking the groceries with it, then slapped back down into the frame.
The groceries, however, were not content to stay in their place.
Some fell into the muddy puddle in a soggy heap and one nicely wrapped package of sliced meat got caught in the spinning spokes of the front wheel, went round past the front forks and got kind of mangled up.
There was only one thing I could do.

I stopped the bike, got off and picked the spilled groceries up. I couldn't deliver them in that state, and so I wiped them off on the front of my coat, and put them back into the basket.
I gave the mangled up sliced meat the same treatment and tossed that back in with the rest.  Some tomatoes in a bag had got mangled and muddy as well, but they didn’t look too bad once I’d cleaned them up a bit.
Pureed tomatoes? Well, what the ‘eck?
So, groceries back in their place and I was ready to go again.
I carried on with my rounds and delivered the groceries, nicely packed in their respective boxes, to the ladies eagerly awaiting them.
Up the path, knock on the door, big smile…
“Good afternoon, Madam. Here’s your groceries!” and back down the path and on the bike again, peddling like crazy to get back to the Meadow Dairy and pick up my next deliveries.
I don’t really know how this could be, because in those days not many people had cars, but by the time I got back to the Meadow Dairy, the mangled up groceries in their hastily cleaned-up wrapping paper were there in the shop waiting for me.
Mister Rolly himself presented them for my inspection upon my arrival.
“You can’t deliver groceries in this state, lad!” he said.
I can’t remember if he asked for an explanation or not. He just told me that, in future, instead of taking spoiled goods to the customers, I should take them back to the shop for replacement.
I think he did say something about the ladies concerned not looking too pleased when they entered the shop with their battered groceries but he was quite lenient with me.
As I said, he was a good man was Mister Rolly!
© Daniel Preston 2011

Editor's note: We tried hard to find a suitable photograph to illustrate the anecdote which Daniel has kindly allowed us to publish here. These pictures were the only ones we could find which include the shop in question and neither of them are of the time the incident took place. The one on the left shows the row looking rather attractive in the early 20th century but, as the right hand picture shows, not too long after Daniel's escapade took place the Meadow Dairy and the row that contained it was in a state of terminal decline.

Here's what Daniel had to say when I showed him the photographs:


Looking at the photo of the 'Meadow Dairy' row of buildings in the early 'Seventies, it is hard to believe that they really did look like that. I never thought of them as being in such a state of dilapitation.
I worked at 'Meadow Dairy' in 1966 as far as I recall. I know I was doing my apprenticeship at Foden's; three pound ten a week when I first started there, so no wonder I had to work Saturdays at 'Meadow Dairy'. I had to pay me share at home as well, as I'm sure was the case with yourself.
That being said, those buildings can't have looked much better when I worked there.
As I recall then, the 'Meadow Dairy' was the first shop with the flat-fronted window. Neddy Bunn lived in one of the houses between 'Meadow Dairy' and Luther Walton's shop. My wife says she came across a reference to Neddy Bunn in 'Middlewich Diary'. He lived next door to us in the Turnpike Cottages and I'm sure you know where they were. Next to Jubilee Terrace anyway. Me and my oldest sister were born in the middle cottage. My Great Grandparents (I never met them) lived in one of the houses in Jubilee Terrace.
I would say then that it may be a good idea to use both of the 'Meadow Dairy' photos, explaining that the time of my story took place some years before the second photo was taken.
I can't recall what the other shops along that row were.
If you are interested, I have a few tales of when I worked as a paper boy for Reg Taylor, none of them incriminatory. DP


(of course it goes without saying that we'd be pleased to hear more of Daniel's tales. We'd also welcome contributions from anyone else who can help us bring the town's past back to life in a similar way -ed)

Brilliant account Daniel. I remember the Meadow Dairy with the big blocks of butter and the butter pats and the assistants' unique way of totting up your bill verbally by stating the cost of the first item, then adding on the cost of the next item, repeating that total, then adding on the next item and so on until they arrived at the final total. All done at breakneck speed! My husband used to deliver groceries for Pegram's as a lad Daniel and agrees with everything you say about the bike. He delivered as far as Wimboldsley, Warmingham and Byley and made a bread delivery to Kraft Dairies every day.