Today we're pleased to be able to bring you a photograph from 1948 which we're sure not many people will have seen before. It comes from the collection of Middlewich photographer Phillip Shales, who was a keen collector of old Middlewich photographs and took many pictures of the town himself over the years.

We're grateful, too, to Kerry Fletcher  of Middlewich Town Council for bringing these photos to our attention.

The picture above comes from a collection which was given to Phillip by the widow of the original photographer, complete with all the negatives, and it's a rare privilege for us to be able to share it with you.

It shows the Middlewich Scouts marching down from their base at the Scout Hall in Brooks Lane on their way to join the rest of the people of the town for the Chairman's Sunday service at St Michael & All Angels in 1948.

This explains the uncommon sight of a procession using Kinderton Street. Before publishing this particular shot, we gave Geraldine Williams a preview of it, and this is what she had to say.

(Note that Geraldine's query about the unusual route of the procession was  answered by Phillip when I called to ask his permission to publish the photo. Geraldine's reference to the street lamps goes back to a couple of slides we published showing unusual swan-necked concrete lamps in Seabank and Lawrence Avenue. The ones in this photo,though, really are wonderful. Does anyone remember them?)


It certainly is an amazing pic. I hadn't realised the scouts were still wearing proper hats in 1948. Wonder what the event was and why they were marching down from Kinderton Street? I don't think it can have been a Civic Sunday service at St Mary's because I think Clarence Costello would have been the first Catholic chairman. The only other event for 1948 would have been the London Olympics! A local Middlewich character - Mrs something double-barrelled (maybe Cooper) - used to live in the house to the right of The Talbot. The lamp posts are very grand but seem to have lost their glass. Are they bigger than that one on Seabank? I've lost track of where that picture appeared in the Diary. I always thought that the public toilets on the Town Bridge were a comparatively recent structure so I was surprised to see them featuring on a 1948 photo. GW


The picture shows Leadsmithy Street as it was 63 years ago and yet, like so many parts of the town, it has changed so little as to be instantly recognisable.
The main difference between the scene then and now is the loss of the buildings in Kinderton Street. 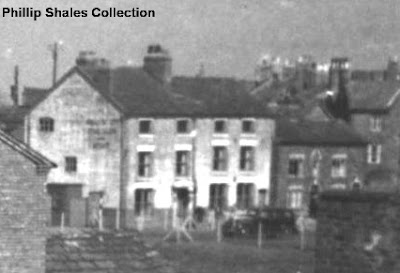 The Talbot Hotel was demolished as part of the Kinderton Street redevelopment in the 1970s, but the houses next door to it disappeared many years before that.

I certainly don't remember them, and I lived in King Street from the 1950s to the 1980s and used Kinderton Street almost every day.

They must have been pulled down not too long after this picture was taken.The little alley way between The Talbot and the houses was called 'Flag Alley' and led up some steps to a terrace of houses running at right angles to the pub.

Note the wonderful 1940s vintage car. 'Middlewich Diary' readers are getting quite good at identifying the old cars which crop up occasionally, so I'm wondering if anyone knows what this is.

The earliest car I can recollect is the Ford Prefect which my Aunt Evelyn (Ridgway) drove in the 1950s. This car looks a bit similar, but I think the bonnet's slightly different.


Returning to the main photo, note the 'Just William' types watching the procession from the Churchyard on the left. About ten years later myself and my contemporaries were still dressed  in a remarkable similar fashion.

If 'fashion' is the appropriate word.