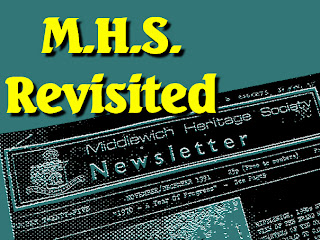 Another article written for the 'Middlewich Heritage Society Newsletter', this time in 1992. By the 1990s, we were all becoming used to the introduction of new technology, but it was still considered worthwhile commenting on the fact that the local telephone exchange had changed from an analogue to a digital system. It had, after all, been 23 years since the last major development, the introduction of STD (subscriber trunk dialling) on the exchange, which is what this article is really all about. By 1992 changes just happened, without a lot of  ballyhoo, speeches and ceremonial telephone call making, but, in 1969, our civic dignitaries couldn't resist getting in on the act and making a big occasion out of everything. This is a peculiarly British trait: there was a time when your local ITV station couldn't even come on the air in the morning without a lot of fanfares, marching music and cod-ceremonial 'handing over of the transmitter' by the IBA. (This doesn't occur now because there aren't any local ITV stations any more).
'Ringing The Changes' makes slightly embarrassing reading today, written as it is in an even more 'joky' style than usual, which led  one discerning reader  to stop me in the street in order to tell me that the article was 'a load of rubbish'.
Well, here it is,' rubbish' or not. Can I draw your attention to the name of the Night operator at the old Middlewich Exchange?
Hmmmm.....I like manual exchanges. Then again, I like electro-mechanical exchanges. But which is better? There's only one way to find out...
It's clear that, as recently as 1992, I for one was still in awe of this mysterious new technology, which accounts for the frankly ridiculous surmise that the equipment 'probably connected itself up, beeped a couple of times, and then went for a cup of tea'. You'd never catch me writing drivel like that these days, but I've left it intact so that you can marvel at my integrity. I'm still in awe of modern day technology, by the way, and welcome it with open arms. I long ago, however, gave up trying to understand how it works.
And isn't it strange to read about  'the digital age' as early as 1992?
Although the telephone exchange itself had 'gone digital' our telephones hadn't (and, in a lot of cases, still haven't). We were still using the old style telephones, connected to the exchange by copper wire (and, again, although we use more modern phones these days, most people still rely on those antiquated copper wires, not only for phone calls, but also for Broadband internet. It's only now, in the second decade of the 21st century, that fibre optics and other advances are being seen locally)
And actually, back in 1992, the only change that telephone users noticed when Middlewich 'went digital'  was that the old 'purring' dial tone changed to the melodious tone we still hear today.

At exactly 7am on April 10th 1992 Middlewich made a giant leap into the digital age with the introduction of the new all-singing, all-dancing, solid-state, space-age digital telephone exchange.
As momentous events in the life of the town go, this one was distinctly low-key. All the lines simply went dead for a few minutes as the new equipment was connected and Bingo! Digital telephones.
Actually, I did have a pleasing vision of engineers twisting bits of wire together and wrapping them with insulating tape, but things just aren't like that these days. The new digital equipment is so sophisticated it probably connected itself up, beeped a couple of times, and then went for a cup of tea.
How different from the grand occasion, only twenty-three years ago, when the town was, after many delays, finally connected to the STD network with the opening of the new electro-mechanical exchange - state-of-the-art technology in 1969.
A 'changeover ceremony' was held at the British Legion Club and Council Chairman Wilfrid Faulkner dialled the home of Ald. H.J.S. Dewes, Chairman of the Cheshire County Council.
There was only one hitch to mar this historic moment. Ald. Dewes was, at the time, at a conference in Vienna. This is the kind of mistake which just can't happen under our new, efficient system of local government.
However, Mr Faulkner was able to talk to Mrs Dewes who remarked on 'the clarity of the call and the speed of the service' and the conversation was relayed to the gathering, including councillors, industrialists, council officials and representatives of the Middlewich Chamber of Trade.
Middlewich's 800 telephone subscribers could now take advantage of the automatic system which linked 6000 exchanges throughout the country. However, explained Mr L.A. Triffitt, Telephone Manager of the GPO's Manchester South Telephone Area (everyone seemed to have a long-winded title in those days), only 1000 of these exchanges could be dialled direct from Middlewich as, if all the exchanges were connected at once there would be a 'time-lag' before connections were made. No doubt everyone present understood perfectly. However, work was still in progress to bring about 'continual improvements'.
In actual fact, the changeover had really taken place six hours earlier at 8.45 in the morning, when the manual exchange behind Middlewich Post Office in Wheelock Street was disconnected after serving the town for 47 years. The supervisor of the Exchange, Mrs Pam Booher, said that all the operators were very sad to be going; 'we enjoyed working in Middlewich. We thank everyone for their good wishes'.
Night operator Harry Hill added, ' a piece of our lives has ended'.
Mr Faulkner paid tribute to the team of operators and recalled that once, when Middlewich UDC had been criticising the local service, the ladies running the exchange had attended the subsequent council meeting to give their answer - a commendable example of Direct Action.
The Wheelock Street exchange was not Middlewich's first. The original National Telephone Exchange was situated in Kinderton Street and I can always recall Cissie Griffiths (another in a long line of honorary 'Aunts' and 'Uncles') telling us that she was once hauled over the coals for not using the standard 'hello caller' greeting.
She knew all of her handful of subscribers by name, and would say 'Hello Fred,', 'Hello George' and so on.
Now you don't get that from a digital exchange.
(with acknowledgments to the Middlewich Chronicle)

Geraldine Williams I understand that it was our home in Kinderton Street that had once housed the National Telephone Exchange. An addendum to the blue plaque called for, surely!!

Dave Roberts Of course. All roads lead to Kinderton Street, as we've said before. That's going to be quite some blue plaque...