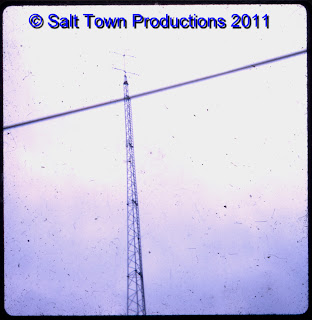 Possibly the most unsuccessful slide in our 1970s collection, despite the fact that it is neither under or over exposed, this is, nonetheless, exactly what it says in the title - Pochin's radio mast in King Street in 1974. The fact that I photographed it in such a way as to give no real clue to its situation is neither here nor there. Pochin (Contractors) made a gradual move from King Street to Brooks Lane in the 1970s and this mast was one of the last things to be moved.
Although our photograph is, perhaps, not of the best, this lattice transmitter mast does have a tale to tell and is a reminder of the days before mobile phone networks made personal communication easy for one and all.
If you look closely at the top of the mast you may just be able to make out some directional antennas (or antennae?). These, famously, pointed at The Great Orme in Llandudno and were part of the 'Pochin Radio Network' which enabled head office and the company's  various building sites around the country to communicate without running up large GPO telephone bills.
The head office system worked through the internal telephone system: you dialed a special number which put you onto the network and you then asked to be connected to whatever site or person you needed to talk to.*
An operator in the switchboard room monitored the conversation and flicked a switch whenever either participant said 'over'  in good old-fashioned Biggles war-time style.
You were warned not to end a sentence with the word over - 'have you had exactly ten thousand bricks or were you a few over over? - as this 'led to confusion', although, in truth, there was quite enough confusion to be going on with without us adding to it.
I spent many hours on this network attempting to make site managers all over the place admit to having taken delivery of bricks, concrete etc. with a total lack of success.
'Can you PLEASE confirm delivery of....'
'Not hearing you (over...)'
When the mast was moved to Brooks Lane the local starling population loved to roost in it and use the Pochin boardroom windows directly beneath as an avian toilet and this led, eventually, to the mast, which by then was redundant anyway, being dismantled in the early 90s.
A mobile phone mast occupies the same site now - possibly enjoying 'Grandfather rights' established by the old mast and so, in a way, the tradition continues.

* Pochins internal telephone system was astonishingly sophisticated for its day. As well as the radio network it also provided access to the typing pool via a recording system for letters. You dialled (another) special number and dictated your letter into the phone (being careful to specify the type of letterhead - PCL for Pochins (Contractors) Ltd or CPNW for Contractors Plant North West). A day or so later you got your letter plus file copy through the internal post.
Posted by SALT TOWN PRODUCTIONS at Friday, September 30, 2011